British and American Grand Manner Portraits of the 1700s 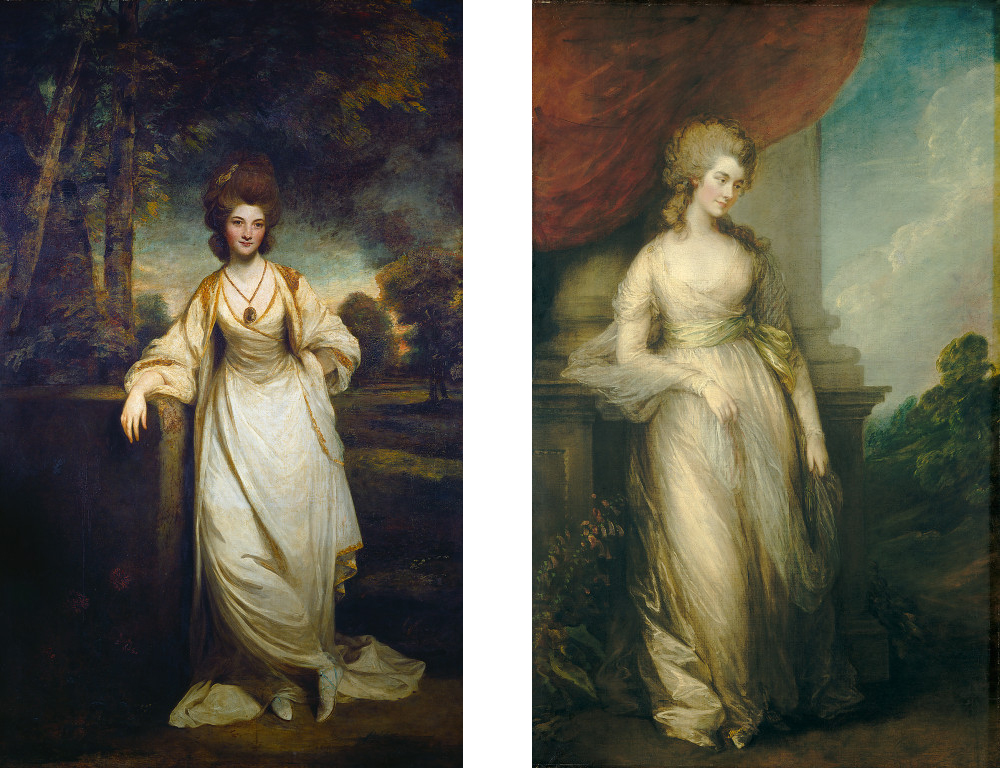 Eighteenth-century British artists and patrons used the terms "Grand Manner" or "Great Style" to describe paintings that utilized visual metaphors. By extension, the Grand Manner came to include portraiture—especially at full length and in life size—accompanied by settings and accessories that conveyed the dignified status of the sitters. Classical architecture, for instance, signified one's civilized demeanor, whole woodland glens implied natural sincerity.

The postures and gestures in Grand Manner portraits were often derived from ancient Roman sculpture or Italian Renaissance paintings. Another major precedent was early seventeenth-century English court portraiture by the two Flemish masters knighted by King Charles I, Sir Peter Paul Rubens and Sir Anthony van Dyck. The connoisseur was expected to appreciate these artistic sources and their subtle references, just as educated readers were assumed to recognize authors' quotations form earlier literature.

Rivalry in the Royal Academy

At its annual exhibitions, London's Royal Academy of art permitted a few entries from students, independent artists, and foreigners. Life membership, however, was limited to no more than forty painters, sculptors, and architects. Such a small group of full academicians generated intense jealousy. English society, for instance, relished the rivalry between Sir Joshua Reynolds, knighted as the official court artist, and Thomas Gainsborough, whom all the royal family preferred to paint their portraits. Regardless of their different techniques and attitudes, both Reynolds and Gainsborough incorporated into their Grand Manner portraits the social symbolism expected by their clientele.

Reynolds, the first president of the Royal Academy, had spent three years in Italy, acquiring a vast knowledge of classical and Renaissance art. His portrayal of the High Sheriff of Nottingham, John Musters, takes its pose from a famous ancient statue of a faun, or mythical woodland creature. Such a sprite of nature was an ideal prototype for a wealthy landowner surveying his estate.

Gainsborough, who never left England, devised an idiosyncratic style of rapidly improvised brushstrokes of multicolored paint, evident in his Master John Heathcote. This portrait, commissioned as a keepsake by aristocratic parents who recently had lost all their other children to an epidemic, shows the four- or five-year-old boy clutching wild flowers to suggest innocence.

Having moved separately from colonial Boston to London, the recently reunited Copleys posed for this large group likeness, the artist’s first portrait to include more than two sitters. The thirty-seven-year-old painter holds sketches and looks out as though to introduce his family.

Flanked by three daughters, Copley’s wife, Susanna, hugs their son. (In eighteenth-century custom, toddlers wore long dresses regardless of their sex.) The generations are completed by Copley’s elderly father-in-law, Richard Clarke, a Tory merchant whose investments had been thrown overboard at the Boston Tea Party. The setting is fanciful; no carpeted room ever merged so ambiguously into a forest. The expensive furnishings, though, imply sophistication, while the idyllic landscape suggests simplicity.

Exhibited to wide acclaim at the Royal Academy in 1777, the ambitious picture demonstrated Copley’s recent studies on the continent, where he had learned to integrate a large number of figures into a coherent design. For example, he placed the babies high up on a sofa and in a lap so that their tiny heads would be on a level with their standing, older siblings.

Depicted in her early thirties, this celebrated soprano had been a lifelong friend of Gainsborough. Decades before, the painter had taken music lessons from her father, a concertmaster at Bath, the resort city where Gainsborough had emerged as Britain’s foremost portraitist.

In 1773 Elizabeth Linley had eloped with the liberal politician and eminent playwright, Richard Brinsley Sheridan. The Rivals and The School for Scandal, Sheridan’s witty comedies, satirize the glamorous world of British society to which sitter and artist belonged. Mrs. Sheridan spent much of her time in the country, imploring her husband, “Take me out of the whirl of the world, place me in the quiet and simple scenes of life I was born for.” Her friend Gainsborough did precisely that by depicting her seated upon a rocky knoll on a windswept hillside almost as if she were a muse of nature. A newspaper reviewer, seeing this work in progress in Gainsborough’s studio in 1786, wrote that the artist intended to add the lambs now visible in the distance so that the picture might “assume an air more pastoral.”

John Hoppner exhibited this engaging portrait of his own three sons at the Royal Academy in 1791. Preparing to bathe in a brook, seven-year-old Catherine Hampden unbuttons his jacket. As the eldest brother, he stands with dignity and greets the viewer. Richard, already undressed, looks adoringly up at Catherine, while baby Wilson struggles gamely to undo his frock. As adults, the older boys had political and diplomatic careers; the baby became a painter.

John Hoppner, something of a prodigy, won the Royal Academy's gold medal for the best painting of the year when he was only twenty-three. Hoppner's father was a German-born surgeon to the British court. The artist himself, however, encouraged rumors that he was the illegitimate son of King George III. Such association with royalty, even though dubious, elevated him in society and boosted his career.

The Frankland Sisters, another Hoppner group portrait, represents descendants of Oliver Cromwell. As a faithful spaniel sleeps at their feet, Marianne hugs Amelia, who holds a crayon and portfolio of sketches. During the Royal Academy’s 1795 exhibition, a newspaper critic noted that the picture “does the Artist great credit: the Group is natural and graceful; the heads are sweetly painted.” Unfortunately, both sisters died of consumption at a young age.

A self-taught child prodigy, Lawrence became a full member of the Royal Academy when only twenty-five. Knighted in 1815 and elected the Academy’s fourth president in 1820, Sir Thomas Lawrence campaigned for the classical Greek sculpture from the Parthenon to be acquired for the British Museum. A reserved bachelor, Lawrence permitted himself only one extravagance—his immense collection of old master drawings, a hobby which eventually left him bankrupt.

Exhibited at the Royal Academy in 1802, Lady Templetown and Her Eldest Son depicts Mary Montagu, only daughter of the 5th Earl of Sandwich, and two-year-old Henry, who would succeed his father as the 2d Viscount Templetown. Henry’s face occupies the exact center of the composition, while Mary’s head is silhouetted against a smooth, sunlit boulder. Lawrence greatly exaggerated the rhythmic grace and length of her legs and arms into the very epitome of slender elegance.

Employing proper academic procedure to create this double portrait, Lawrence turned to Thomas Gainsborough’s earlier Mrs. Richard Brinsley Sheridan. The windblown veils, reclining poses on grassy banks, and identical crossings of the ladies’ ankles reveal Lawrence’s source, even though he added the boy, changed the background, and reversed the orientation of his composition.

David Monro Binning from Perthshire, Scotland, commissioned this double portrait of the two sons, George and Alexander, he had with his first wife. The boys wear identical suits with fur-trimmed hats. Their flared white collars and pale auburn hair draw attention to their faces, which are aligned on a diagonal axis cutting across the composition. George, the elder brother, is presumably the one who holds a riding crop; his younger brother, Alexander, looks out at the viewer. The autumnal russets and golds and the sketchy brushwork in the sky and foliage superbly characterize Henry Raeburnâs style. The smooth modeling of the flesh and clothes, though, is a late influence from Thomas Lawrence.

Raeburn apprenticed at sixteen to a goldsmith, soon taking up painting miniature likenesses as an extension of the jeweler’s art. After some training in London and Italy, he quickly rose as Scotland’s foremost painter, joining the landed gentry in Edinburgh. The handsome Raeburn was a prolific portraitist as well as an avid sportsman—golfer, archer, hunter, and angler.

Although Raeburn shipped pictures to London for exhibition at the Royal Academy, his election to life membership was delayed until 1815, when an opening occurred upon the demise of a full academician. Only a year before his own death, Raeburn finally was knighted during King George IV’s visit to Scotland.

A daughter of the 4th Earl of Carlisle, Lady Betty, as she was known to her family, and her children sat for Reynolds in April and June of 1777. The two years that elapsed before the completion of this majestic group portrait would have noticeably aged the children, but Reynolds worked from abstract principles of design rather than observation of nature. One of his conceptions for Grand Manner likenesses was: “Each person should have the expression which men of his rank generally exhibit.”

Reynolds therefore suppressed psychological individuality to gain a grandeur appropriate for these aristocrats. Lady Betty graciously deigns to accept our presence. As heir to his father’s estate, John commandingly surveys the distance, and Isabella Elizabeth displays a coy shyness. Even the Skye terrier gazes upward with proper loyalty.

The figure group forms a pyramidal silhouette, and the beech trees accentuate a spatial wedge that recedes toward two vistas on the picture’s sides. This stable, triangular configuration is reminiscent of Holy Families, sheltered beneath canopies, painted by Raphael and Poussin. The earthy color scheme of ochers and umbers recalls the sonorous tones employed by Titian and Rembrandt. Reynolds’ ability to synthesize from so many sources astounded Thomas Gainsborough, who reportedly exclaimed, “Damn him, how various he is!”

Depicting the only child of an Oxfordshire baronet, Miss Juliana Willoughby proves George Romney’s gifts in its understated simplicity. The entire color scheme, centered on the pure white dress, is nothing more or less than pastel tints of the three primary hues: red, yellow, and blue. The composition is as elegant as the tonality. The sun bonnet rises upward to the left at an angle exactly opposite that of the hillside’s steep slope. When Juliana first sat for Romney in May 1781, she was wearing a baby’s cap, evident now only in X-radiographs. Seven more posing sessions and two years later, she was six years old; so, Romney added the more mature, brimmed bonnet.

Introverted and neurotic, Romney refused to join the Royal Academy even though he was widely sought after and well paid for his ability to portray women and children with tender affection. Raised in rural Lancashire, Romney was nearly forty when, in 1772-1775, he could refine his talents in Italy, primarily Rome, before returning to London.

This full-length Grand Manner portrait by Romney, Mrs. Thomas Scott Jackson, portrays the wife of a director of the Bank of England. Painted just before Romney’s trip to Italy, this earlier work pays tribute to Sir Joshua Reynolds’ influence in its cool gray tonality, dignified posture, and complicated details.

Activity of any kind was without precedent in Grand Manner society portraiture, so this startlingly vigorous image caused a sensation at London’s Royal Academy exhibition of 1782. As Stuart said of this epoch-making work, his first full-length portrait, he was “suddenly lifted into fame by a single picture.”

The artist later recalled that when the Scotsman William Grant, from Congalton near Edinburgh, arrived for his first posing session, he observed to Stuart that “the day was better suited for skating than sitting for one’s portrait.” To this the painter assented, and they both sallied out to their morning’s amusement. Their ensuing sport on the frozen Serpentine in Hyde Park, with the twin towers of Westminster Abbey in the distance, gave Stuart the idea for this unusually candid likeness. (In true Grand Manner tradition, though, Stuart did derive the figure’s basic stance from an ancient nude statue, the Apollo Belvedere, merely adding modern winter clothes and ice skates.)

With black and white clothing and a ruddy complexion, Grant stands in stark contrast to the dull, icy gray setting. The daring design and fresh theme were so successful that young Stuart was able immediately to set up his own London studio. Many of Stuart’s later portraits, painted after he returned to the United States in 1793, are in the Gallery’s collection.