Because he portrayed virtually all the notable men and women of the Federal period in the United States, Gilbert Stuart was declared the "Father of American Portraiture" by his contemporaries. Born in Rhode Island, the artist trained and worked in London, England, and Dublin, Ireland, from 1775 to 1793. He then returned to America with the specific intention of painting President Washington's portrait.

Stuart resided in New York (1793-1795); Philadelphia (1795-1803), where he did his first portrait of George Washington; and the new capital at Washington, D.C. (1803-1805). In 1805 he settled in Boston and painted the Gibbs-Coolidge Set, the only surviving depiction of all five first presidents. Before his death at seventy-two, Stuart also taught many followers. A charming conversationalist, Stuart entertained his sitters during long hours of posing to sustain the fresh spontaneity of their expressions. To emphasize facial characterization, he eliminated unnecessary accessories and preferred dark, neutral backgrounds and simple, bust- or half-length formats.

Stuart often was irritatingly slow in completing commissions, in spite of his swift, bravura brushwork. Though he inevitably commanded high prices, Stuart lived on the verge of bankruptcy throughout his career because of his extravagant lifestyle and inept business dealings. In London, for instance, he had owned a carriage, an unheard-of presumption for a commoner. And Stuart's years in Ireland, both coming and going, had been ploys to escape debtors' prison.

Stuart in England and Ireland

Stuart received his earliest artistic training in his native Rhode Island from an itinerant Scottish painter. After sailing to London in 1775 he studied under Benjamin West, a Pennsylvanian who had been the first American artist to achieve renown in Europe.

Stuart's own fame took hold when he exhibited The Skater (Portrait of William Grant) at London's Royal Academy of art in 1782. The painting enlivened England's "Grand Manner" tradition of formal portraiture by depicting Grant in vigorous activity rather than in a static, formal pose. Stuart soon commanded prices higher than any portraitist in London except for the court painters Thomas Gainsborough and Sir Joshua Reynolds.

When Stuart's Sir Joshua Reynolds was shown at the Royal Academy in 1784, the portrait annoyed the sitter who, as president of that cultural institution, was jealous of the young American's rising reputation. It depicts Reynolds taking a pinch of snuff, which was simply too undignified for that gentleman's strict, idealizing taste. Nonetheless, Stuart multiplied his successes in Dublin, where he moved in 1787 and gained a monopoly over Irish portraiture before sailing for the new United States in 1793.

A Selection of Stuart's Sitters

The National Gallery of Art lends many of its forty-one portraits by Stuart to government agencies and other institutions. For example, William Thornton and Mrs. William Thornton, a pair of portraits of the Capitol's architect and his wife painted in 1804, was once on display at The Octagon House in Washington because that historic building was designed by Thornton. Other Stuarts alternate on view in our American or British rooms, including:

Sir John Dick, 1783, Scottish naval officer with a medal from Catherine the Great of Russia

Counselor John Dunn, about 1798, member of the Irish parliament, painted in Philadelphia

Commodore Thomas Macdonough, about 1818, naval hero in the War of 1812 who captured the British fleet on Lake Champlain

John Randolph, 1804/1805, thirty-two-year-old Virginia orator whose remarkably youthful appearance belied his position as the most forceful member of the federal Congress

This portrait of a New York businessman's wife is considered one of the finest characterizations produced by an American artist. Mrs. Yates sewed while she posed, leaving little doubt about her industriousness. As she turns to appraise the viewer, her skeptical gaze and tightly pressed lips also reveal her uncompromising rectitude.

British sitters had expected flattery, but Americans desired factual accuracy. Once in the United States, Stuart complained, "In England my efforts were compared with those of Van Dyck, Titian, and other great painters -- here they are compared with the works of the Almighty!" The Almighty had given Mrs. Yates a bony face, and that is precisely what Stuart had to portray.

Stuart employed the stiff, angular lines of her silhouette to communicate Mrs. Yates' capability and astuteness. Even though the image is stark, the paint surfaces demonstrate Stuart's virtuosity at its best. Reflections from the coral upholstery, for instance, dance onto her silk dress in rapidly dashed brushstrokes.

Mrs. Yates was the wife of the senior partner in the New York firm of Yates & Pollock, importers of East Indian and European goods. The National Gallery of Art's collection includes four other portraits of members of her family commissioned from Stuart at the same time: Richard Yates, her husband; Lawrence Reid Yates, her brother-in-law; Catherine Yates Pollock (Mrs. George Pollock), her daughter; and George Pollock, her son-in-law. 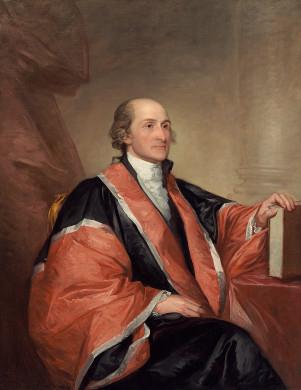 The classical column, crimson drapery, legal tome, and robes of state in this impressive portrait recall the "Grand Manner" tradition Stuart had used to emphasize the social status of British aristocrats.

As a framer of the Constitution and the first Chief Justice of the United States from 1789 to 1795, John Jay was the first American statesman of international reputation whom Stuart ever painted. The success of this likeness of the chief justice, painted in New York in 1794, introduced Stuart to an appreciative clientele in America.

The forty-nine-year-old Jay could spare time to pose only for the head. His nephew modeled the judicial robe so that Stuart could complete the body. Broadly painted strokes suggest the robe's gleaming scarlet, black, and white satin, setting off by contrast the careful execution of Jay's handsome features.

Stuart rendered Jay's complexion with deftly executed highlights in opaque paint on top of translucent glazes of thinned oils. Later the artist explained his methods for painting such lively skin tones: "Good flesh color partook of all colors, not mixed so as to combine in one tint, but shining through each other, like blood through natural skin."

With a letter of introduction from Chief Justice John Jay, Stuart was granted his first sittings from George Washington at Philadelphia, then the capital, in March 1795. The president, then sixty-three years old, grumbled about the drudgery of posing, and all of Stuart's wit and wisdom failed to interest him. The artist claimed that "an apathy seemed to seize him, and a vacuity spread over his countenance, most appalling to paint."

Nevertheless, this canvas has spontaneity because of its relatively quick, sketchy technique. The warm tan underpainting shows through the thinly brushed hair, while slashes of pigment model the black queue ribbon and form the highlights on collar and cravat. To impart Washington's imposing six-foot, two-inch stature, Stuart placed his head high in the design, as though the president towered above the viewer. Finally, he surrounded the president with a fiery glow like a halo.

Stuart made 104 or more likenesses of George Washington, who was president from 1789 to 1797. The pictures are grouped in categories named after the first owners of the original portraits from which Stuart made his own replicas: Vaughan (facing to his left), Athenaeum (facing to his right), and Lansdowne (full-length). Because this work was purchased by Samuel Vaughan, an American merchant living in London and a close friend of the president, Vaughan's name became associated with seventeen versions.

Mrs. John Adams felt that "if we mean to have heroes, statesmen and philosophers, we should have learned women." Stuart's portrait, begun when the first lady was fifty-six, captures the patrician beauty of her straight nose and arched brows. The forthright painting also leaves little doubt about the force of character, intellect, and principles of this daughter of a Massachusetts minister.

This likeness was Stuart's only completed picture of Abigail Smith Adams. It and its companion piece of her husband, John Adams, were started in 1800 but not delivered until 1815. The Adams' eldest son and the future sixth president, John Quincy Adams, politely stated his family's attitude toward the artist's procrastination: "Mr. Stuart thinks it the prerogative of genius to disdain the performance of his engagements."

John Adams was vice president during both of George Washington's terms and served as chief executive himself from 1797 to 1801. This likeness was begun in Philadelphia during his presidency, and shows Adams at sixty-five years of age; however, like its companion portrait, Abigail Smith Adams, it was not finished until fifteen years after the couple sat for Stuart.

Although the second president was a patient sitter, the impish painter later delighted in telling a friend, "Isn't it like? Do you know what he is about to do? He is about to sneeze!" (Both the artist and the sitter habitually used snuff.)

In this sketch from life, soft brushstrokes merely suggest rustling movement and indistinct contours in the hair and lace. The portrait subtly expresses the inquisitive, analytic aspects of Adams' character; seated low in the composition, he confronts the viewer directly.

The pose of this first study of Adams inspired Stuart's replica in the Gibbs-Coolidge Set of the first five presidents. Adams, wearing a charcoal gray coat in this life portrait, wears a crimson jacket in the more carefully finished replica.