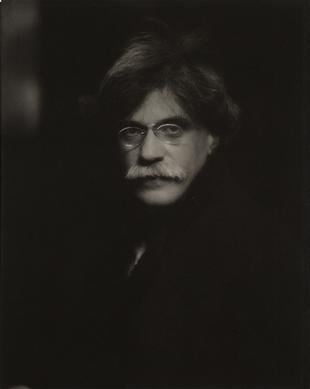 Celebrated for his photographs, Alfred Stieglitz (1864-1946) was one of the most influential figures in early twentieth-century art. In his New York City galleries--the Little Galleries of the Photo-Secession, known as 291 from its address on Fifth Avenue; the Intimate Gallery; and An American Place--he gathered around him some of the most gifted artists, photographers, and critics of his time. The modern European and American art he presented there challenged his audience to consider new ideas about painting, sculpture, and photography. Modern Art and America: Alfred Stieglitz and His New York Galleries brings together for the first time in more than fifty years a representative collection of the exact works that Stieglitz exhibited in an effort to reveal more clearly the nature of his contribution to American art. 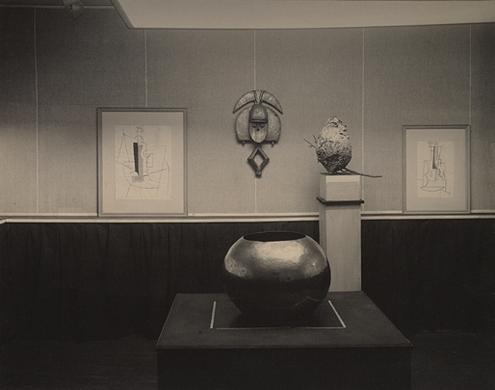 Born in Hoboken, New Jersey, in 1864, to German immigrants, Stieglitz traveled to Berlin in 1881 to study engineering. While there he became fascinated with photography and on his return to the United States in 1890 became a leader among those who sought to prove that photography was capable of artistic expression. In 1902 he founded the Photo-Secession, a group dedicated to the cause of artistic photography, and in 1903 he began to publish Camera Work, an elegantly designed journal that included cogent discussion of photography and the other arts. In 1905, at the urging of his young protégé, the photographer and painter Edward Steichen, he opened the Little Galleries of the Photo-Secession at 291 Fifth Avenue so that the group would have a place to exhibit. Because Stieglitz and Steichen believed that photography needed to be seen in relation to other arts, 291 from its inception was conceived as an exhibition space not only for photography but also for painting, sculpture, and drawings. 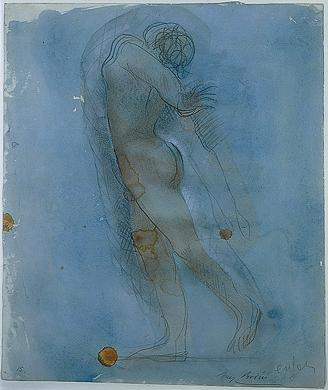 After a year of exhibiting American and European photographs at 291, Stieglitz and Steichen believed they needed an invigorating influx of new ideas. Steichen, at the time, was living in Paris and had befriended many artists. Acting as Stieglitz's European agent, he sent over exhibitions of such artists as Henri Matisse, Paul Cézanne, Pablo Picasso, and Auguste Rodin, whose drawing Hell was exhibited at 291 in 1910. Many of these early exhibitions, frequently the first presentations of these artists' works in this country, included innovative ways of portraying the human form that often shocked 291's audience with frank depictions of sensuality and challenges to conventional notions of beauty. Stieglitz's aim, however, was not to sensationalize, but to instruct artists and the American public about the fundamentals of the new art and to provoke serious discussion.

Responding to the Armory Show, 1913

In 1913, stimulated in part by the groundbreaking exhibitions held at 291 in the previous five years, the Association of American Painters and Sculptors hosted a large exhibition of modern European and American art at the Sixty-Ninth Regiment Armory in New York, including work by some of the most innovative artists of the period, many of whom Stieglitz had exhibited earlier. Before, during, and after the Armory Show, Stieglitz organized a series of tightly focused exhibitions at 291: first, he showed watercolors by the American artist John Marin, then his own photographs, followed by the work of the French modernist Francis Picabia. Each exhibition included studies of New York City, and thus over the course of three months visitors to 291 were able to contrast how European and American artists responded to the city. In what he called a "diabolical test," Stieglitz timed the exhibition of his photographs to coincide with the Armory Show to see if his own art withstood comparison to the latest developments of modern painting. 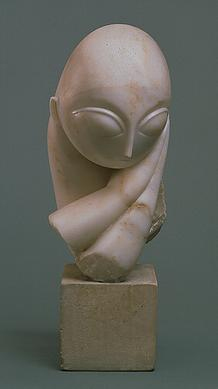 In the wake of the Armory Show several other New York galleries began to exhibit modern European art. Unwilling to be one among many, Stieglitz altered 291's course and, aided by Steichen and the Mexican caricaturist Marius de Zayas, began to exhibit more experimental art, such as that of Constantin Brancusi in 1914. Later that year, with the help of de Zayas, Stieglitz mounted what he claimed to be the first exhibition anywhere to present African sculpture as fine art rather than ethnography. Inspired by their spiritual and expressive qualities, Stieglitz exhibited sculpture from central and west Africa. In 1915 he installed works by Picasso and Georges Braque together with a reliquary figure from the Kota people of Gabon and a wasp's nest. In this way, he sought to stimulate debate about the relationships between art and nature, Western and African art, and intellectual and supposedly naïve art.

During World War I, 291 became a haven for European artists. To express the new spirit they brought to the gallery, Stieglitz, de Zayas, and Picabia, along with Paul Haviland, a supporter of 291, and Agnes Ernst Meyer, a former critic, launched a new publication named for the gallery. Many articles in 291 applauded America as the most modern nation in the world, but writers also challenged readers to recognize and embrace the central role that the machine played in their life. In 1917 the French dada artist Marcel Duchamp carried this idea a step further when he declared that a machine-made object, a urinal he titled Fountain, was a work of art. Stieglitz concurred with Duchamp, and after Fountain was rejected from another exhibition, he showed it at 291.

Although modern art received greater attention after the Armory Show, few New York galleries showed American works. Deeply committed to American artists, Stieglitz made them the focus of his activities after 1915. In 1916 and 1917 he presented a series of exhibitions of the painters Marsden Hartley and Georgia O'Keeffe, and the photographer Paul Strand, that summarized the dramatic changes that had occurred in American art in the past decade. Each artist had integrated the latest developments in modern European art with their own experience and constructed a powerful new vocabulary of form and color. Despite these innovative exhibitions, Stieglitz was forced to close 291 in June 1917. For more than twelve years he had supported the gallery with his own or his first wife's personal income, yet mounting financial difficulties, caused in large part by the United States' entry into World War I, made it impossible for him to continue to do so.

The Anderson Galleries and the Intimate Gallery

In 1921, after four years without an exhibition space, Stieglitz borrowed rooms from Mitchell Kennerley, owner of the Anderson Galleries on Park Avenue, and mounted a show of his own work. In the following years he organized exhibitions there of his art and that of O'Keeffe, as well as work by other American artists. In the fall of 1925, seeking a more permanent presence, Stieglitz rented a small room from Kennerley that he called the Intimate Gallery and mounted monographic exhibitions there for four years. Stieglitz structured the Intimate Gallery as a cooperative space to encourage a sense of community among artists, to diminish the idea of art as a commodity, and to establish a more personal relationship between artist and patron. Insisting that he receive no remuneration, he stipulated that a portion of the proceeds from most sales be applied to a fund that went to cover the rental fee of the gallery.

In 1921, 1923, and 1924 Stieglitz held monographic exhibitions of his photographs at the Anderson Galleries. Among his most celebrated works were portraits of O'Keeffe, who had moved to New York in 1918 and begun to live with Stieglitz shortly thereafter. These photographs demonstrate his careful study of many artists he had shown at 291, including Rodin, Matisse, Cézanne, and Picasso. In addition, Stieglitz's photographs from this time revealed a significant influence of O'Keeffe's own art. Like her, he became entranced with the American landscape and for almost the first time in his career began to photograph the trees, hills, and clouds around his family's summer home in Lake George, New York. 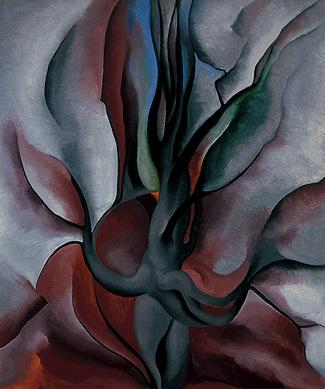 O'Keeffe's art also changed considerably during the 1920s. Stieglitz exhibited her work at the Anderson Galleries in 1923 and 1924 and thereafter in several solo exhibitions at the Intimate Gallery. In 1923 when she exhibited her highly inventive abstractions of the late 1910s and early 1920s they were subjected to extensive Freudian interpretations. In response, O'Keeffe tried to make her art as objective as possible and, as in Autumn Trees--The Maple, turned to photography to ground her work in the real world. Through her close association with Stieglitz as well as other photographers, she saw the simple but effective visual strategies they used to infuse their depictions of everyday reality with a newfound intensity. For example, she saw how photographs could use lenses of different focal lengths to compress space, thus charging each plane of the picture with equal weight and energy. Intrigued by the sharp lines and flat, clean surface of a photograph, she rejected the short, textured brushstrokes she had used earlier in her art. These elements combined to give her paintings an ambiguous quality: they are clearly derived from a vision related to photography, yet strangely and often elusively different from it. 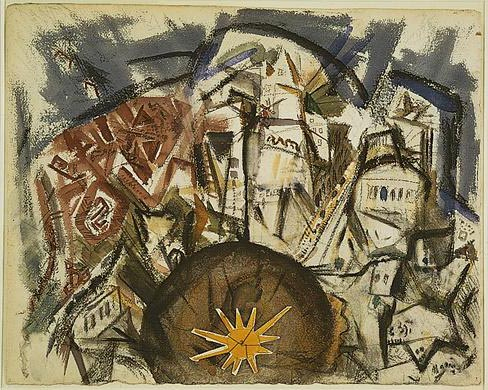 In Alfred Stieglitz Presents Seven Americans, at the Anderson Galleries in the spring of 1925, the photographer united for the first time the artists whom he would champion for the rest of his life. With work by Hartley, Marin, O'Keeffe, Strand, and himself, as well as Charles Demuth and Arthur Dove, this exhibition and subsequent ones he mounted in the Intimate Gallery from the fall of 1925 to the spring of 1929 demonstrated the shared vision, subject matter, and approach of the "Seven Americans." All were deeply committed to the creation of a new art that expressed contemporary American life. Exploring a wide variety of subjects, including landscapes, cityscapes, and abstract portraits, these artists also extensively experimented with the materials of their art: Dove constructed collages composed of rulers, denim, or sticks, and used both oil and metallic paint on canvas, wood, and glass; Marin made collages using bits of string and paper; and both Stieglitz and Strand explored several kinds of photographic prints. 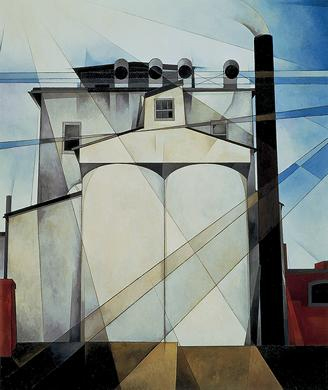 In the fall of 1929 Stieglitz opened An American Place on the seventeenth floor of a building at 509 Madison Avenue in New York. Continuing the tradition established at the Intimate Gallery, each year until his death in 1946 Stieglitz presented monographic shows, almost always of his three "core" artists--Dove, Marin, and O'Keeffe--interspersed with exhibitions of works by Demuth, Hartley, Strand, and occasional shows of his own photographs. Yet with the onset of the Depression, and the political and economic upheaval it created, the strong sense of community that had characterized the years of the Anderson Galleries and the Intimate Gallery dissipated and An American Place began to feel less like a communal meeting place than a sanctuary. As each of these artists turned inward, they created their most mature art. All of them refined their techniques and purified their compositions, looking for strong simple iconic forms as in Demuth's My Egypt and Dove's That Red One. With their direct, frontal presentations of monolithic structures, bathed in a crystalline light, their work acquired spiritual overtones. Their purpose was not just to present an American vista but to suggest something more universal: Demuth's Egypt was the industrial landscape of his home in Lancaster, Pennsylvania, whereas for Dove the essence of life was found in the humble structures of Long Island Sound; O'Keeffe, Strand, Marin, Hartley, and Stieglitz found the universal in the desert of the Southwest, the rugged coast of Maine, or the skyscrapers of New York.

To a great extent, Stieglitz was responsible for this flowering of American art. For more than thirty years he had orchestrated one of the most influential dialogues ever created in American art and culture. All "Seven Americans" drew profound support from the community that he had fostered and deep inspiration from his own art. The vision of a photographer had liberated, enlightened, nurtured, and perhaps ultimately defined their world.