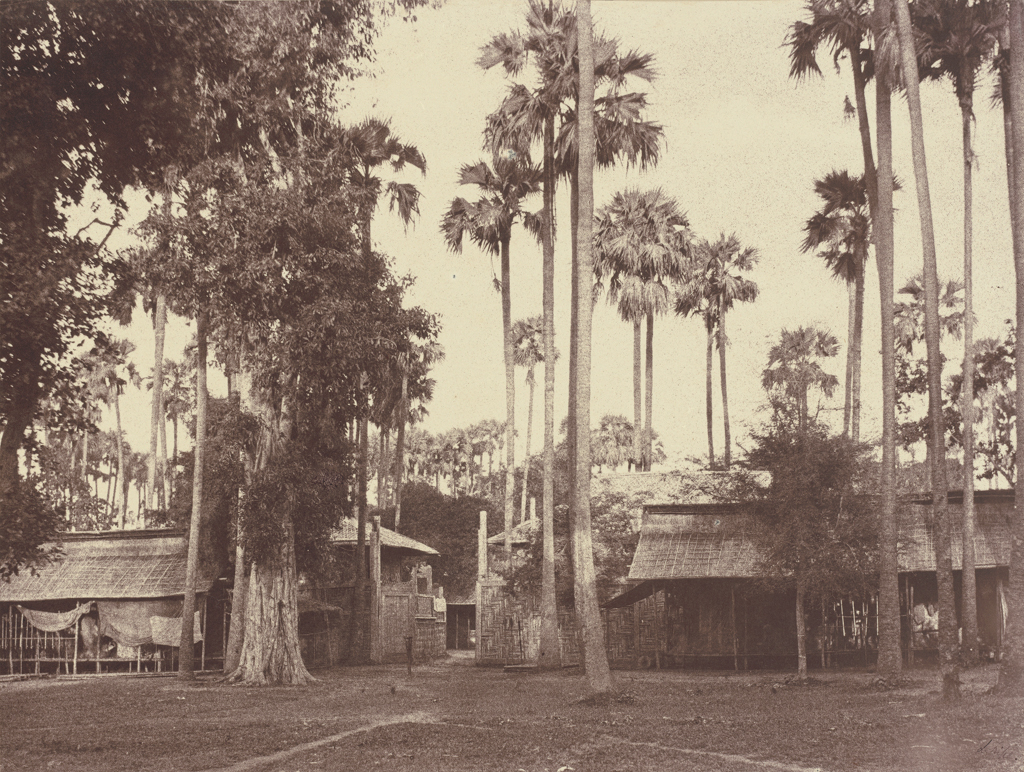 King Mindon went to considerable expense to prepare for the British mission, building this residency for them across a lagoon from Amerapoora and connected to it by a teak bridge (see next slide). 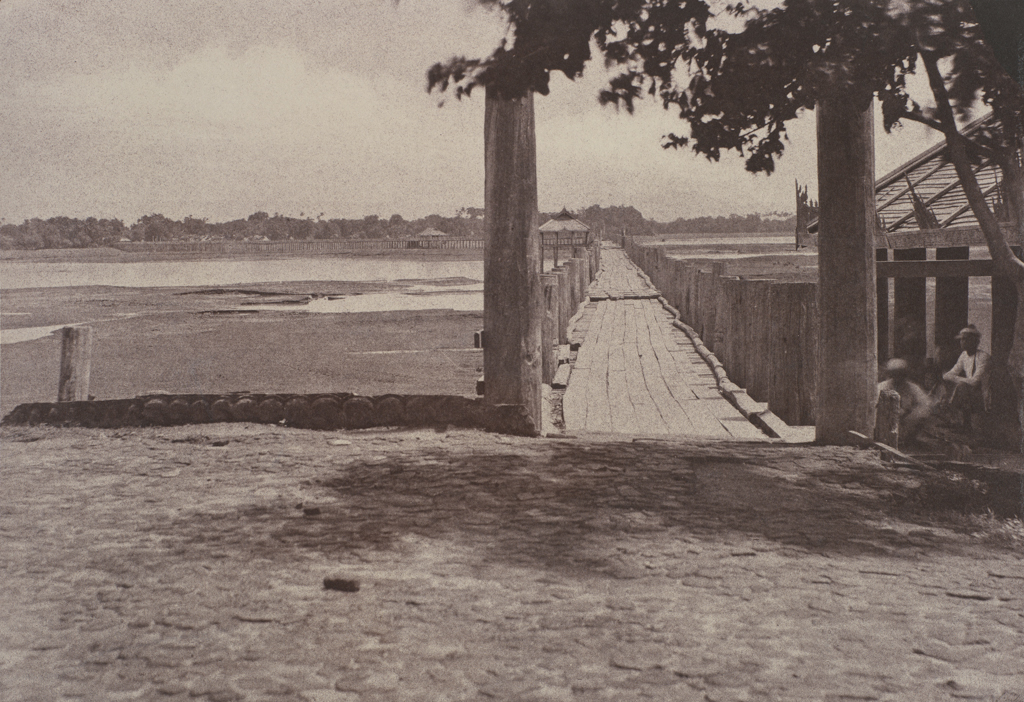 With the eye of a surveyor, Tripe took this dramatic view looking toward the 3/4-mile-long bridge that led to the British residency across the lagoon. To highlight the scale of the massive teak pillars in the foreground, he included two figures seated in the shade of a tree and small rest house to the right. Many of the buildings in Amerapoora that Tripe photographed were dismantled after 1859 when the capital moved to Mandalay, but this bridge, which Tripe’s colleague Henry Yule called “apparently interminable,” survives today. 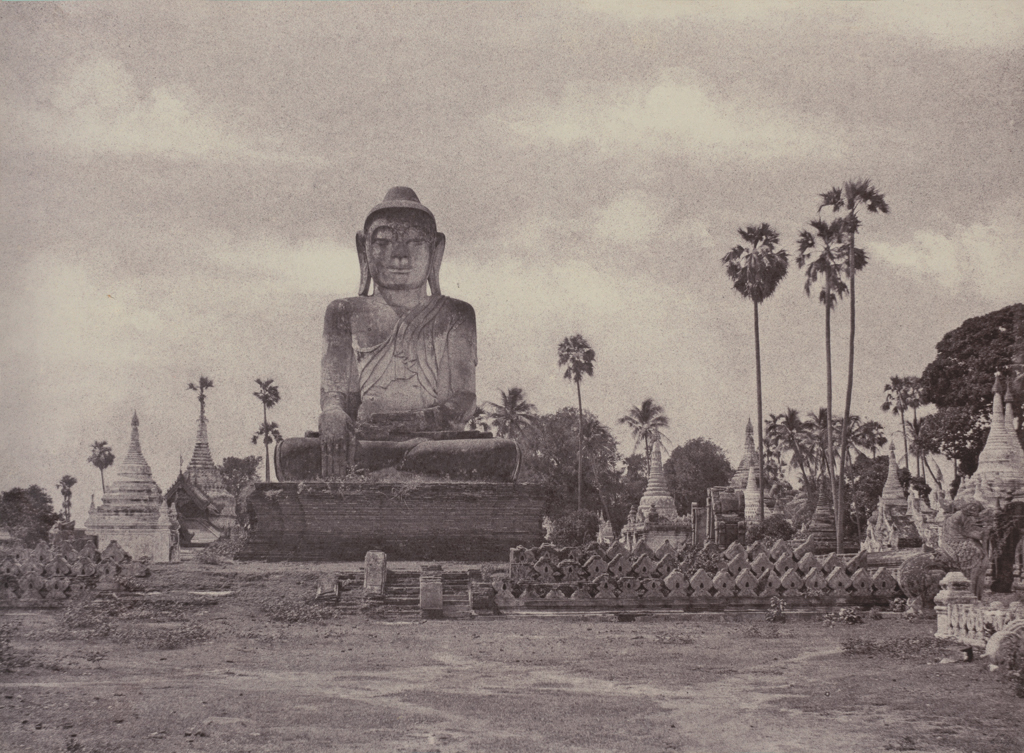 Amerapoora: Colossal Statue of Gautama, Close to the North End of the Wooden Bridge, September 1–October 21, 1855
Collection of Charles Isaacs and Carol Nigro

This monumental figure of Gautama, the most popular Burmese form of the historical Buddha, overlooked the near end of the long wooden bridge seen in the previous photograph. As in most Southeast Asian images of Gautama, he is portrayed seated cross-legged with his left hand in his lap and his right hand gently touching the earth. 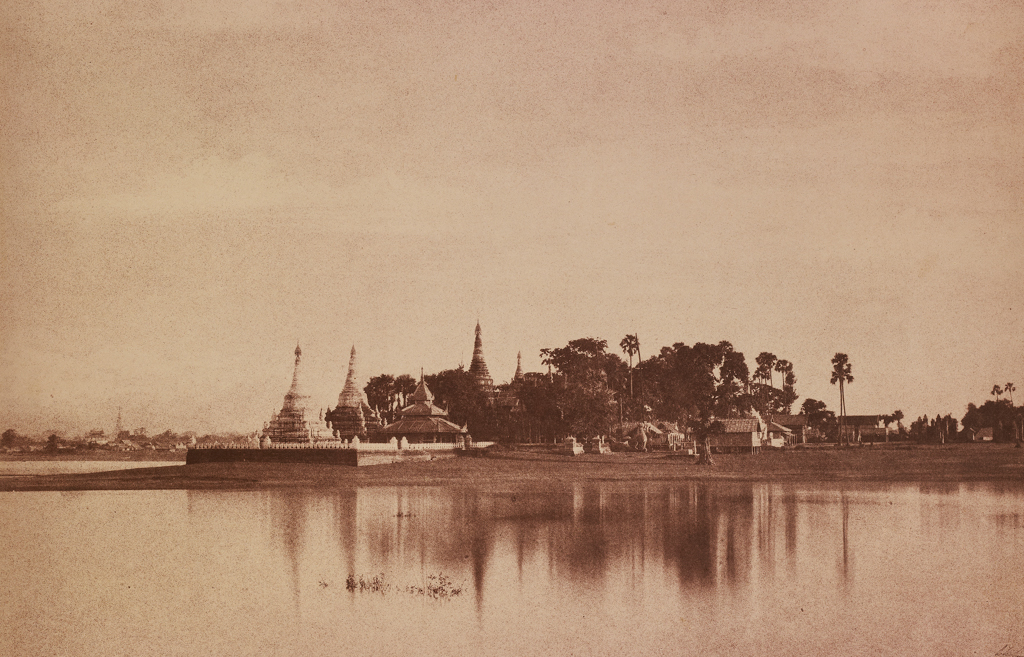 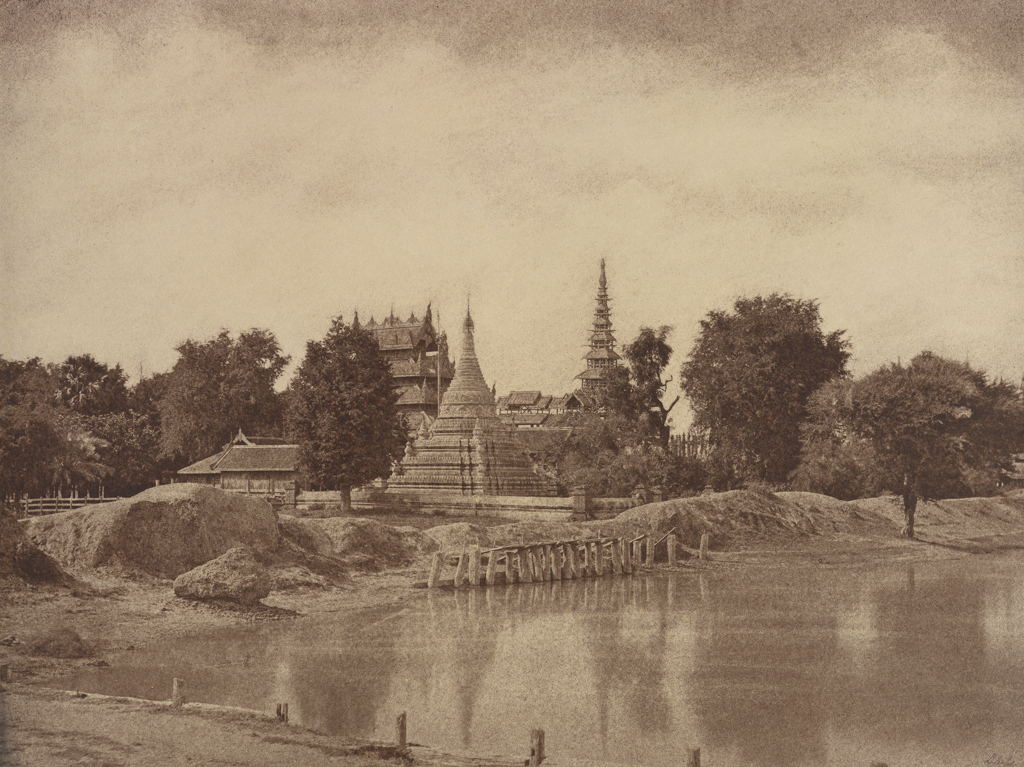 Tripe retouched most of his negatives made in Burma and India. Here he painted the banks of clouds on the negative and even added horizontal strokes in the foreground to suggest ripples on the water. He may have done this to compensate for the numerous pinholes in the negative that caused a peppering of black dots scattered across the print. 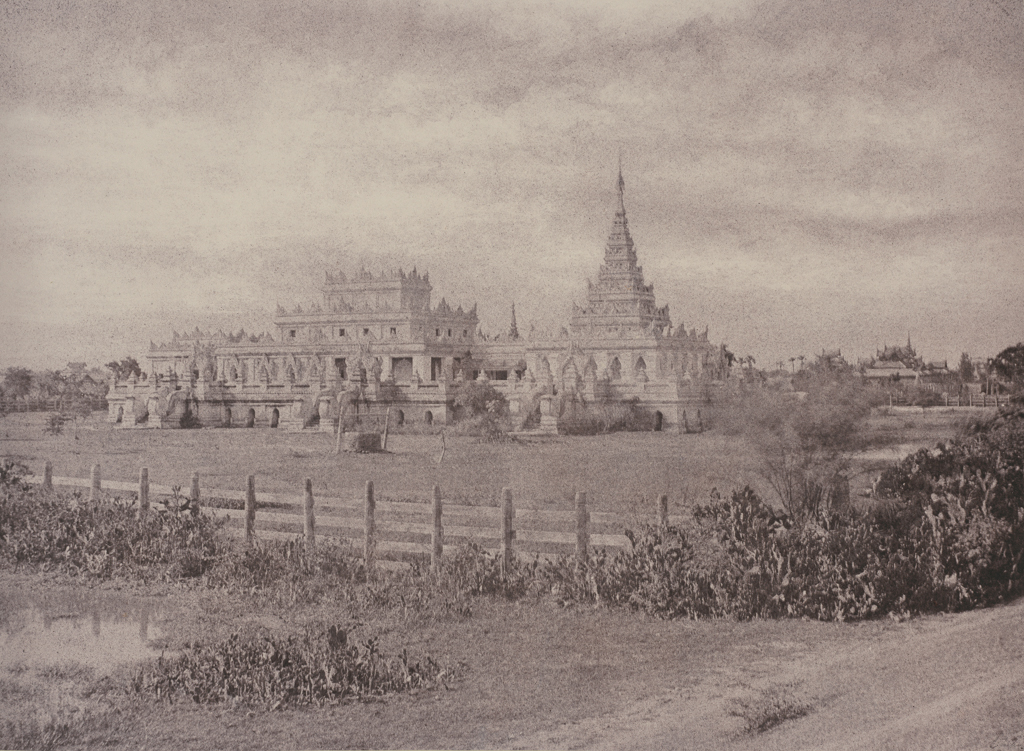 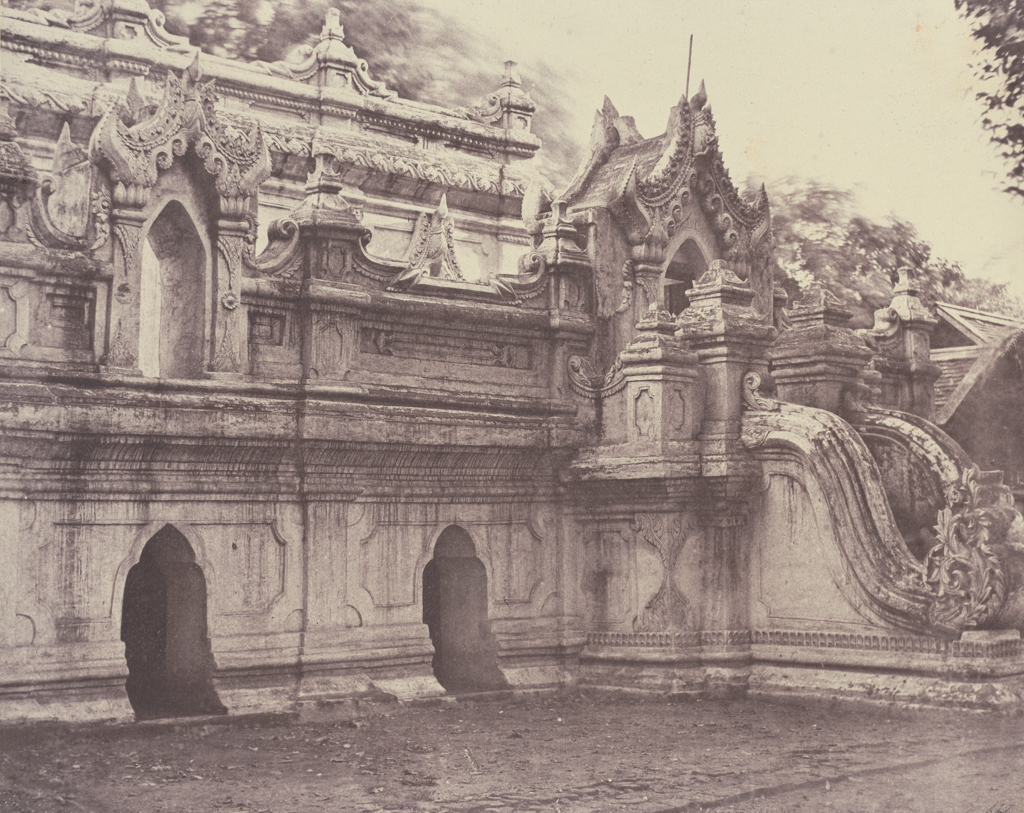 Most of the monasteries that Tripe encountered were made of wood, but a few monumental brick monasteries, such as this one, were constructed in the 18th century. In this photograph, Tripe focused on the massive staircase, with its sweeping balustrades and profuse ornamentation. The remains of this building today lie southwest of Mandalay. 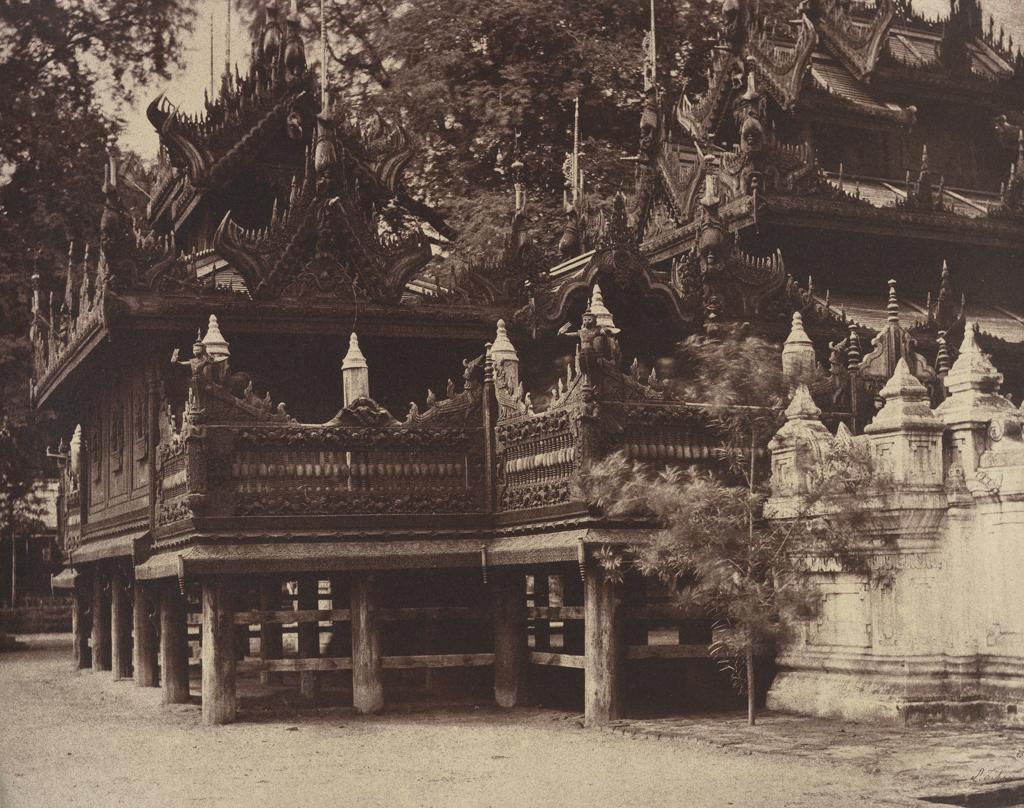 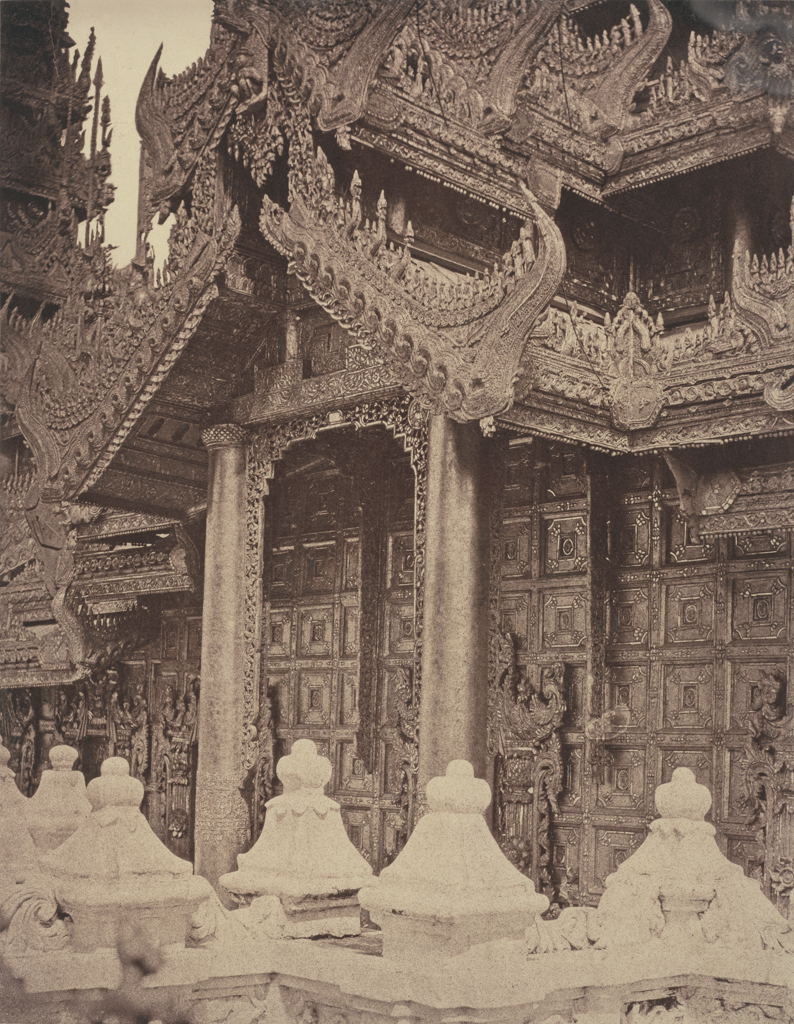 This photograph shows the eastern entrance to the Royal Daughter’s Monastery, built as a pious offering by the queen during King Pagan’s rule from 1846 to 1852. Only the highest ranking patrons could afford the enormous expense of building such a richly ornamented monastery. 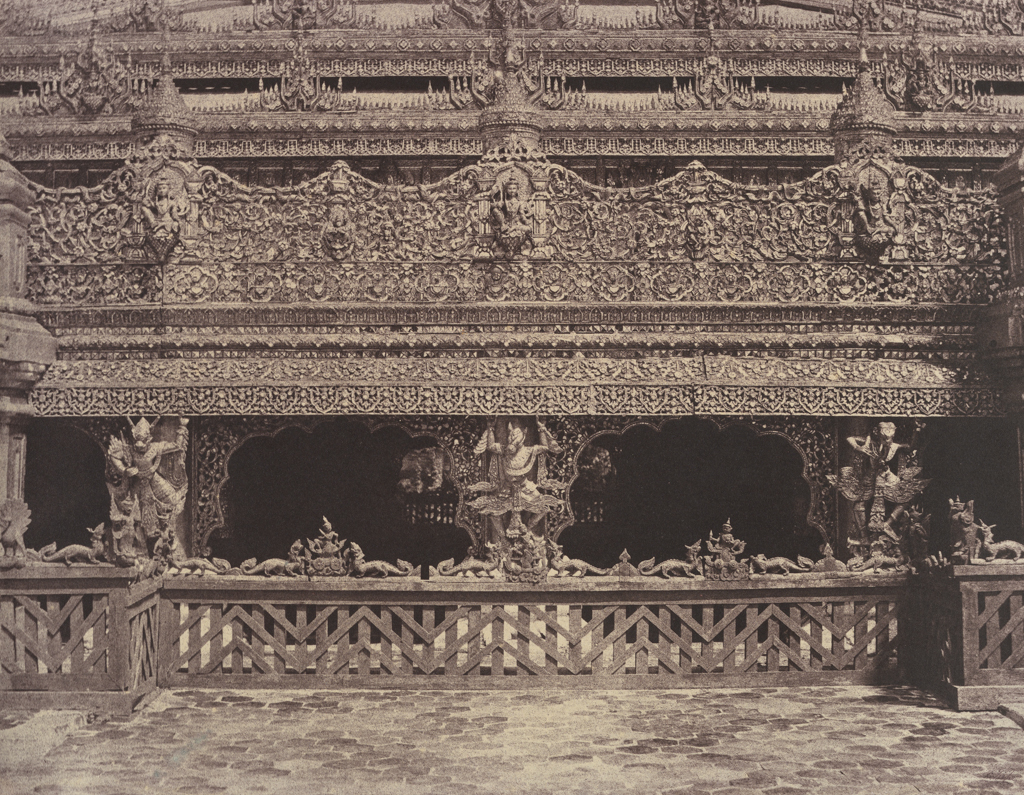 Amerapoora: Part of Balcony on the South Side of Maha-oung-meeay-liy-mhan Kyoung, September 1–October 21, 1855
Lent by The Metropolitan Museum of Art, Purchase, The Buddy Taub Foundation, Dennis A. Roach and Jill Roach, Directors, and Alfred Stieglitz Society Gifts, 2012

This elaborately carved wooden balcony, part of a complex of monastic buildings created during the reigns of Tharawadi (ruled 1837–1846) and Pagan (ruled 1846–1852), is often considered the zenith of Burmese woodcarving. This building survived until 1945. 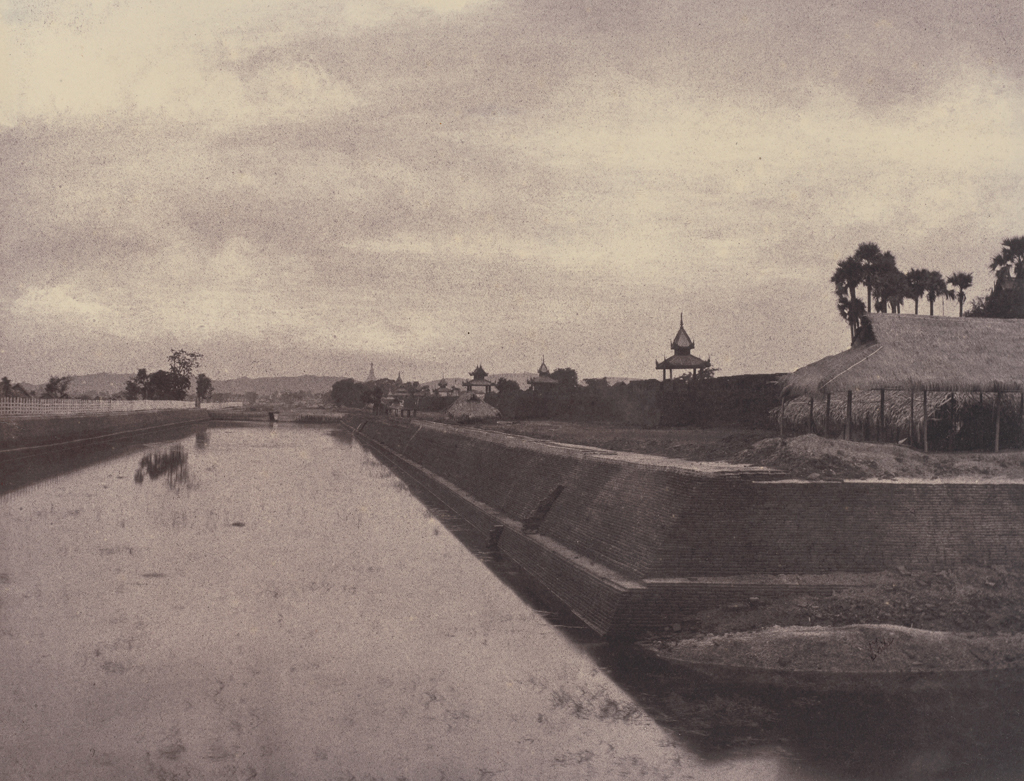 With its deeply receding perspective, this photograph of the city wall on the southeast corner of Amerapoora shows the precise angularity and great length of the brick-lined moat. As an army officer, Tripe may have intended the photograph to present clear documentation of the meagre fortifications of the capital city. King Mindon also recognized Amerapoora’s defensive weaknesses and moved the capital to Mandalay in 1859 to get out of the reach of British gunboats. 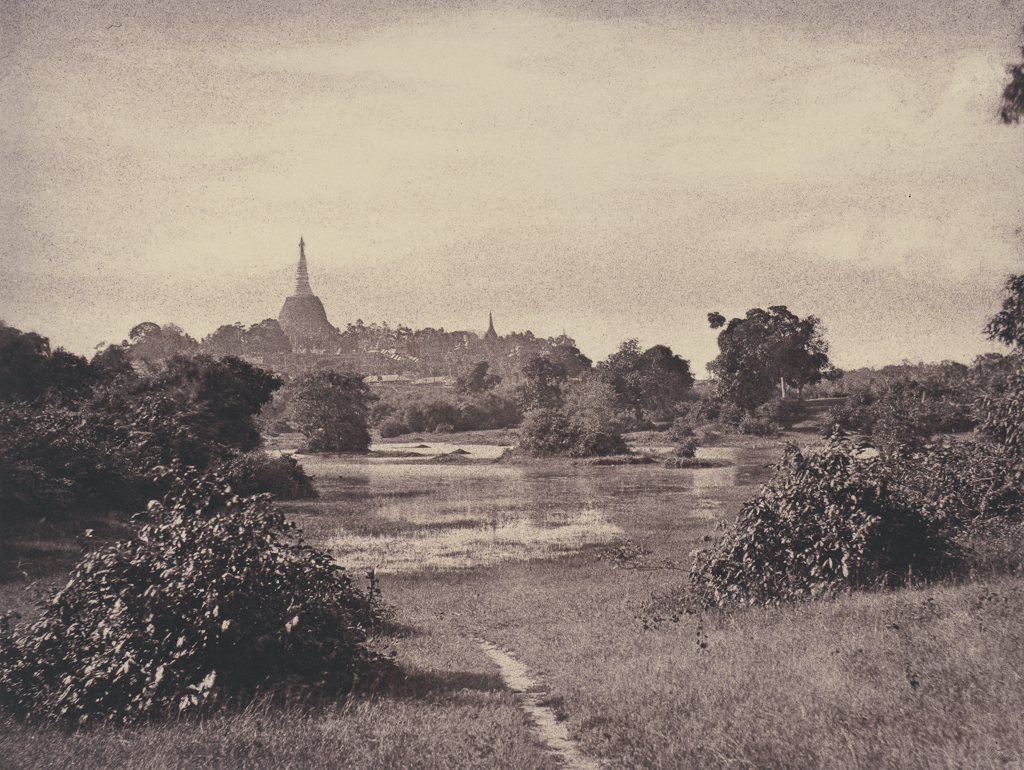 The Shwe Dagon Pagoda, seen in the distance at left, was the preeminent sacred site for Burmese Buddhists; for the British, however, it was a place of key battles in wars against the Burmese in 1824–1826 and 1852. Occupied by the British in 1824, the pagoda was subsequently retaken and heavily fortified by the Burmese in 1852. Tripe’s own regiment joined others in fierce fighting over the Shwe Dagon, which they recaptured on April 14, 1852. Discovery of a Burmese plot to retake the pagoda and stage an uprising against the British in November 1853 led Lord Dalhousie to continue military occupation of the hill and its sacred pagoda. 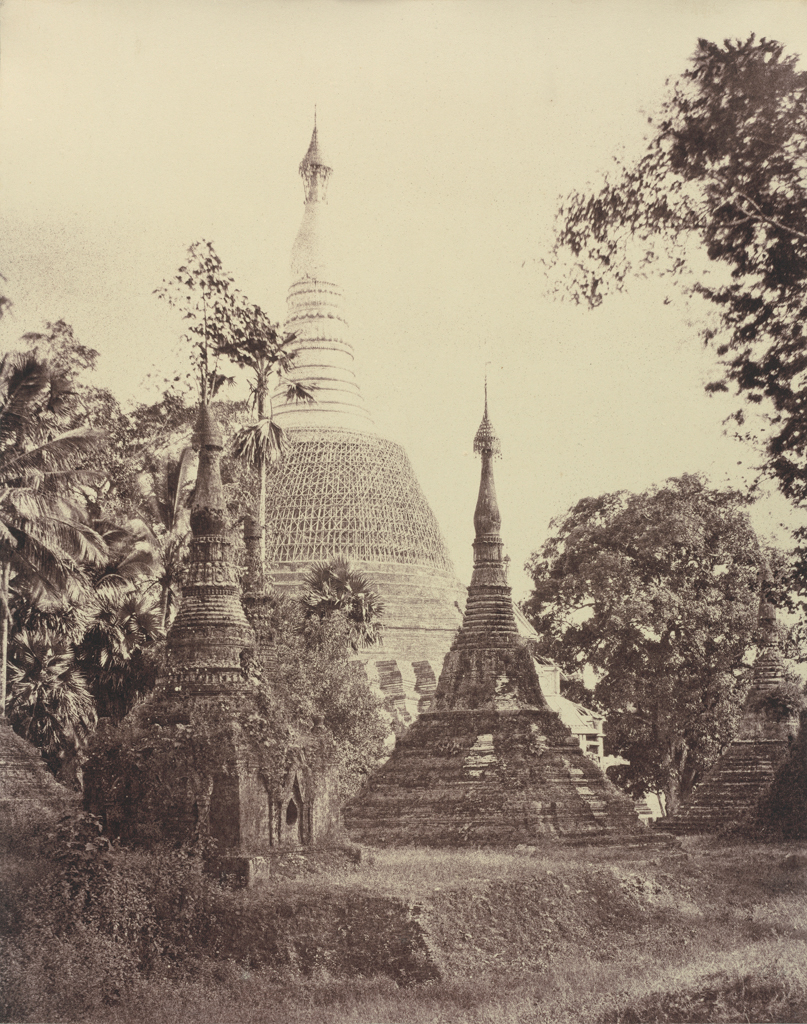 Like other major stupas, the Shwe Dagon Pagoda was regularly renovated. Tripe’s photograph shows the network of bamboo scaffolding that enabled workmen to regild its bell-shaped surface. 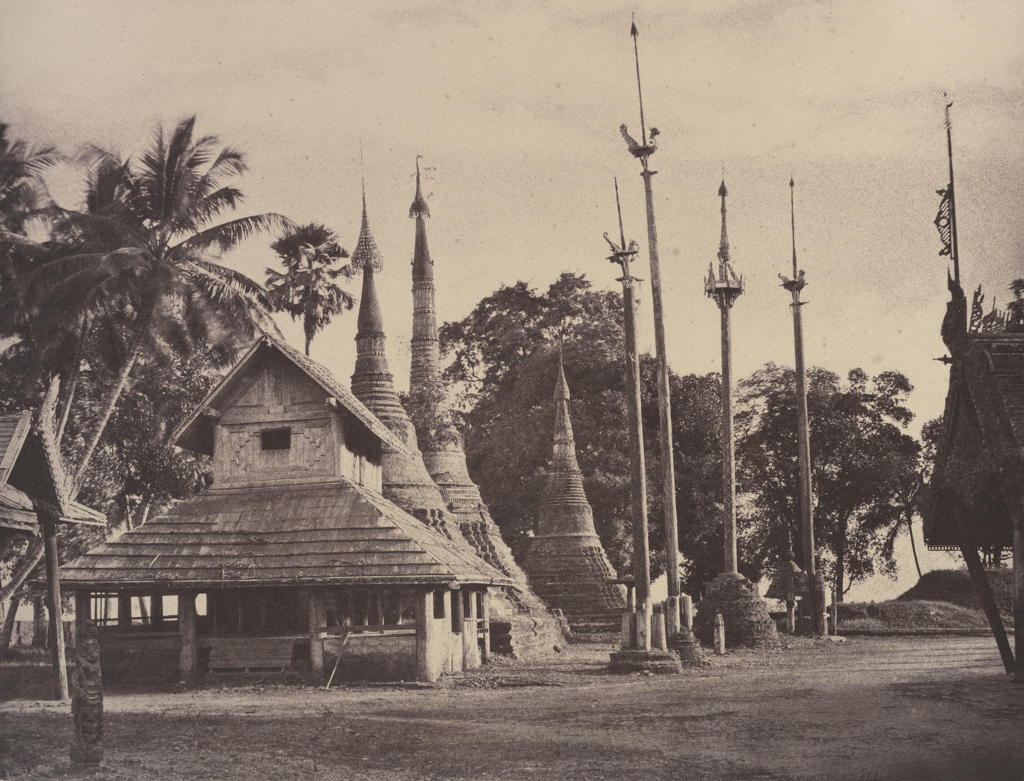 Rangoon: Henzas on the East Side of the Shwe Dagon Pagoda, November 1855
Lent by The Metropolitan Museum of Art, Purchase, The Buddy Taub Foundation, Dennis A. Roach and Jill Roach, Directors, and Alfred Stieglitz Society Gifts, 2012 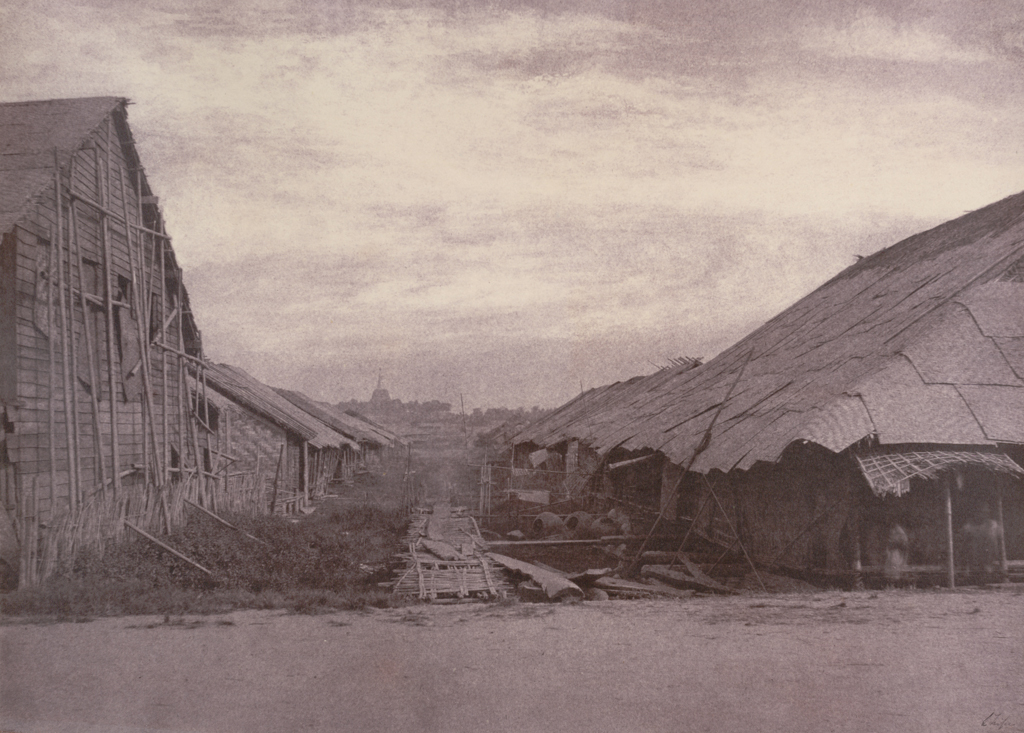 In 1855, Rangoon was in the midst of transition. A few years earlier, the British announced their plans to build a new, modernized colonial city on this site, which had been damaged by fires, floods, and war. In this photograph, Tripe framed a distant view of the Shwe Dagon Pagoda between two rows of simple buildings and a makeshift raised wooden walkway, all of which would soon be demolished. 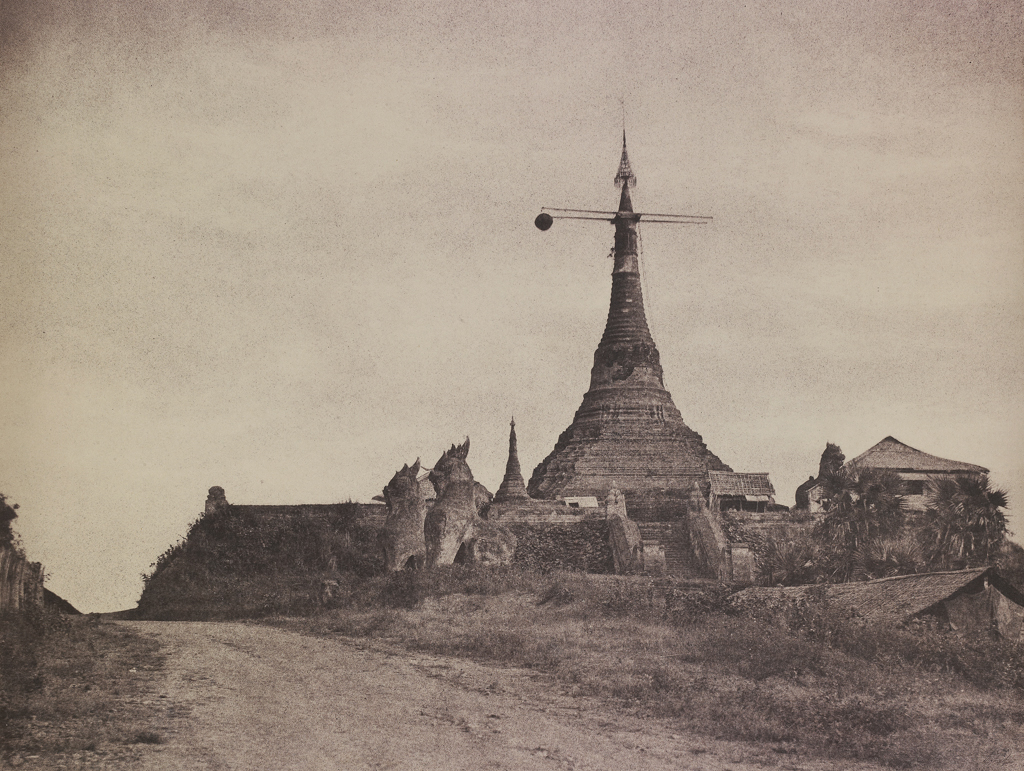 When sailing on the Irrawadi River, visitors first saw the spire of this pagoda, high on a hill outside of Rangoon. The British outfitted it as a signal station to allow naval captains to reset their chronometers with the precision needed for accurate navigation. The British regarded the signal station as evidence of their civilizing influence on Rangoon, but to the Burmese it marked the desecration of a sacred site.