Machines on Paper: From Leonardo da Vinci to Vittorio Zonca 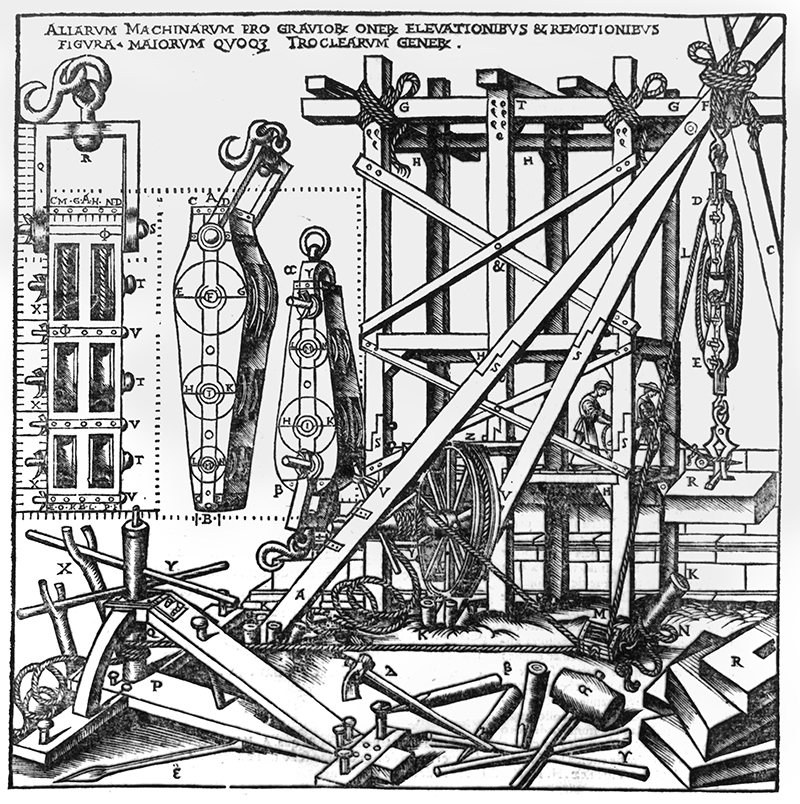 From the late 15th to the early 17th century in Europe, “machine books”—manuscripts and printed books that contained intriguing and dramatic images of machines usually accompanied by textual explication—proliferated. My book project undertakes a contextual and comparative study of these images and books. It begins with a comparison of the machine books of two contemporaries: Leonardo da Vinci (1452–1519), looking especially at his Madrid Codex I, and Francesco di Giorgio Martini (1439–1501) of Siena, who wrote treatises from the 1470s through the 1490s. It will include a study of the Vitruvian tradition and commentaries on machines. For example, in his De architectura, the 1st-century BCE architect Marcus Vitruvius Pollio wrote that machinatio (machines) were part of architecture, a subject to which he devoted Book X. Numerous 16th-century writers illustrated and commented on Vitruvius’s Book X, including Cesare di Lorenzo Cesariano (1483–1543), whose Italian translation and commentary was published in 1521; Guillaume Philander (1505–1565), who published his Latin commentary in 1543; and Daniele Barbaro (1514–1570), whose Italian and Latin translations were published in 1556 and 1567. In the late 16th century, profusely illustrated books known as “Theaters of Machines” appeared. I also will be undertaking a detailed and comparative investigation of these late 16th- and early 17th-century books and their often dramatic images, including those by Jacques Besson (active second half of 16th century), Agostino Ramelli (1531–c. 1600), and Vittorio Zonca (1568–1602). My questions include: What are the central concerns of these books? How do the texts relate to the images? And who were the authors and printers? In addition, I examine how the books compare to one another, who their patrons were, and in what ways their treatment of machines and the efficacy of machine work came to stand for political power and authority.

My two months at the Center have been highly productive. During my fellowship, I began the second chapter of my book, which concerns the Vitruvian tradition. The National Gallery of Art library is uniquely rich in books on the Vitruvian tradition because of that topic’s relevance to the history of architecture. Although I have worked on Vitruvius more generally in the past, I had not worked on his book on machines or on the later commentators of that book. My ability to retrieve books from and browse the stacks allowed me to not only review scholarship that I had worked on previously, but also to find new works on the shelf and in the catalog. As I was investigating both primary sources and recent scholarship, I began writing the chapter and have completed a sizable portion of it. More important, I have been able to conceptualize the chapter and see that it is working.

During this fellowship, I have also realized the significance of other ancient authors on machinery, such as Aeneas Tacticus (fl. 350s BCE), Asclepiodotus (1st century BCE), Pseudo-Aristotle (3rd century BCE?) in Mechanical Problems, Biton of Pergamon (2nd or 3rd century BCE) on war machines, Archimedes (287–212 BCE) on equilibrium, Philo of Byzantium (end of 3rd century BCE), Athenaeus Mechanicus (1st century BCE), and (by reputation) Ctesibius of Alexandria (fl. 270 BCE). Vitruvius himself was influenced by at least some of these individuals’ writings, as were his 15th-century successors. A study of the renewed interest in antiquity and antiquities in the 15th and 16th centuries must therefore include an investigation of ancient traditions of machinery prior to and coeval with Vitruvius’s Book X.

The ways in which 15th- and 16th-century authors used and reinterpreted these materials is of great interest. One tentative conclusion is that in the later period, machines took on a cultural and symbolic importance well beyond their practical uses, and beyond their ancient significations. This importance was underscored by the increasing use of dramatic images within discussions of machines. I suggest that spectacular images of machinery began to symbolize political power and moral authority in new ways in the late 15th and 16th centuries. The diverse ways in which machine books and their images were used is part of my ongoing inquiry.

Pamela O. Long will continue to research and write her book in Washington, DC.