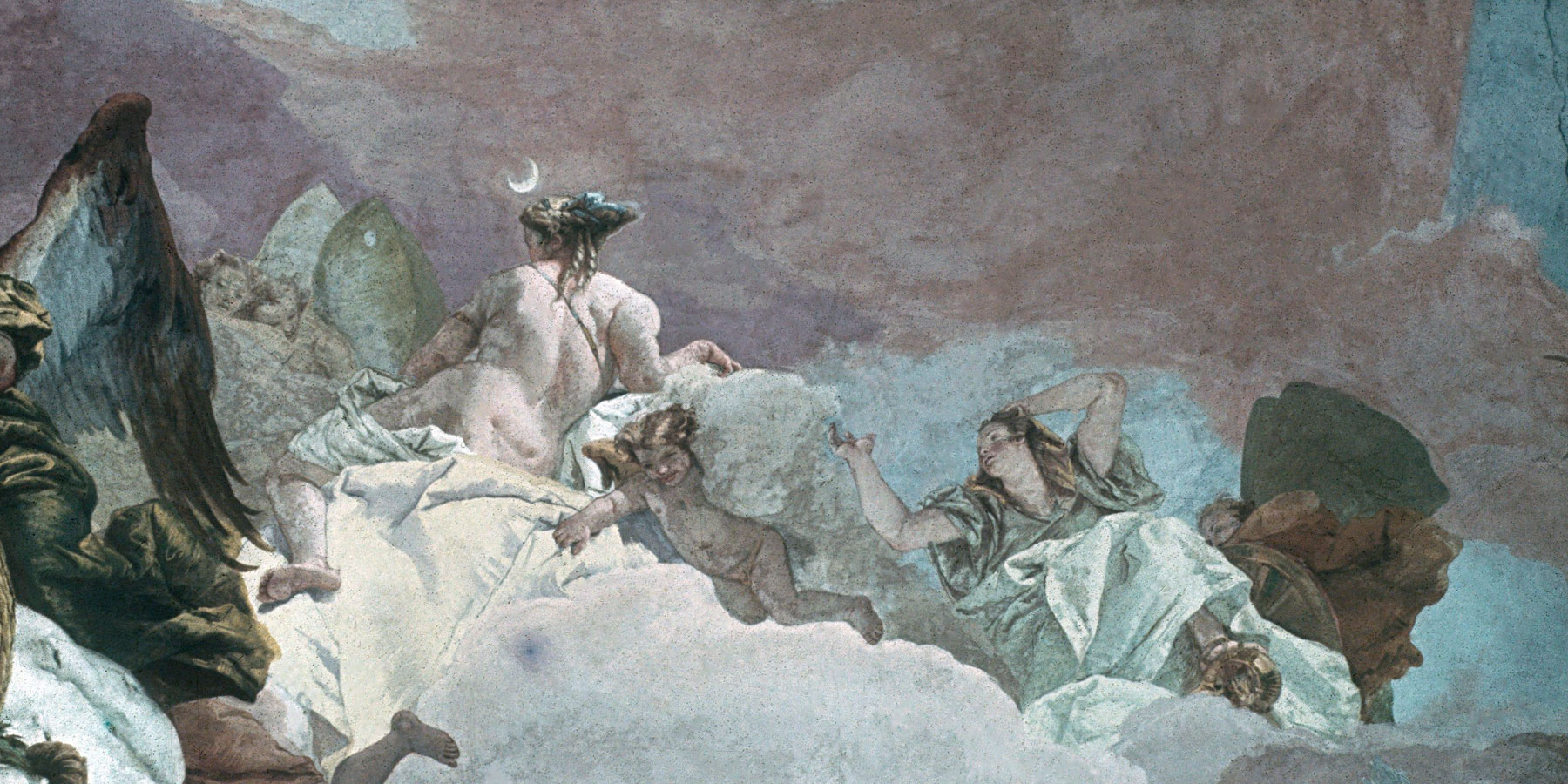 Cardboard and metal mounts hold Agfacolor film between two pieces of glass in these original 1943/1945 slides. The center slide shows the nineteenth-century murals in Joseph Goebbels’ Propaganda Ministry in Berlin.

A survey photographer from Berlin, probably Peter Cürlis (1924–1997), is seen reflected in the mirror at far left, standing on a ladder with his camera. Potsdam (Brandenburg, Germany). Stadtschloss, apartment of Frederick the Great, writing cabinet decorations above doorway on north wall (overall on right, detail on left). (Photo by Peter Cürlis, 1943)

Berlin (Germany). Reichsministerium für Volksaufklärung und Propaganda (formerly Palais des Prinzen Karl and Ordenspalais). The palace was built in 1737 and remodeled by Karl Friedrich Schinkel (1781–1841) from 1827 to 1828. In 1933 it became Joseph Goebbels’ propaganda ministry, and later it served as the administrative headquarters for the mural paintings survey. The palace was located on the north side of Wilhelms-Platz, which was also the location of the Reich Chancellery and Hitler’s bunker. The palace was destroyed in 1945. (Rare Postcard Collection)

Berlin (Germany). Altes Museum. This neoclassical building on the north side of the Lustgarten was originally designed by Karl Friedrich Schinkel (1781–1841) for the Prussian royal family’s art collection and later became a state museum. It was built from 1824 to 1828 and damaged in 1945. (Wethey Rare Postcard Collection)

Berlin (Germany). Altes Museum, Vestibule. Bernhard Wilhelm Rosendahl (1804–1846), Scenes after Etruscan Wall Paintings. This mural cycle represents the progression of the world from chaos to civilization. The mural was destroyed in 1945.

Berlin (Germany). Altes Museum, Upper Vestibule. Cycle of Human Life, Men Bringing Ram and Offerings to the Altar. These frescoes were designed by Karl Friedrich Schinkel (1781–1841) and represent the struggle of mankind against barbarians and the elements. This fresco was destroyed in 1945.

Berlin (Germany). Altes Museum, Upper Vestibule. Cycle of Human Life, Vase Painter and Draftsman. These frescoes were designed by Karl Friedrich Schinkel (1781–1841) and represent the peaceful avocations of civilization. They were destroyed in 1945.

Berlin (Germany). Neues Museum, on right, behind Schinkel’s Customs House. Designed by Friedrich August Stüler (1800–1865), a student of Karl Friedrich Schinkel (1781–1841), and built from 1843 to 1855, the building was recognized for its artistic internal decorations. It was damaged during bombing of Berlin. (Foto Marburg, detail)

Berlin (Germany). Neues Museum, Dome Hall. Hermann Anton Stilke (1803–1860), Christianity Adopted as the Religion of the State. This work in the barrel vault was part of a cycle of paintings that were partially destroyed in the bombing of Berlin.

Berlin (Germany). Stadtschloß. Built from 1443 to 1716, this palace was heavily damaged by Allied bombing in 1945, and demolished by the GDR in 1951. (Rare Postcard Collection)

Berlin (Germany). Stadtschloß, Knights’ Hall, throne canopy topped by a magnificent crown and intricate vault and wall decorations. Martin Luther stood under this crystal chandelier when he addressed the Diet of Worms in 1521. The chandelier was purchased from the City of Worms by Frederick William III and installed in the Stadtschloß. (Photo by Peter Cürlis, 1943/1945)

Berlin (Germany). Stadtschloß, Knights’ Hall. Johann Friedrich Wentzel (1670–1729), Assembly of Olympian Gods, ceiling painting, and the solid silver musicians’ balcony. The Farbdiaarchiv slides of the Stadtschloß provide possibly the only color images ever taken of the interior of the massive palace. (Photo by Peter Cürlis, 1943/1945)

Bruchsal (Baden-Württemberg, Germany). Schloß, staircase. This palace was constructed from 1722 to 1770 as a residence for the Prince-Bishops of Speyer, the only ecclesiastic complex of its kind on the upper Rhine. It is known for the opulent staircase by Balthasar Neumann (1687–1753), who also designed the staircase in the residence of the Prince-Bishops of Würzburg. The palace was destroyed March 1, 1945, but was later restored. (Postcard from the Rudolf Wittkower Collection)

For images of the war-damaged palace, see Image Collections’ holdings and the Monuments Men web feature.

Bruchsal (Baden-Württemberg, Germany). Schloß, staircase dome fresco. Januarius Zick (1739–1797), History of the Speyer Diocese, 1751–1754. After his plans to rebuild the residence attached to Speyer Cathedral were thwarted by Protestant municipal authorities, Prince-Bishop Damian Hugo Schönborn (1676–1743) decided to build an entirely new palace in Bruchsal, 25 km to the south. In this fresco, Damian Hugo plans the new palace with his architects and building contractors beneath a host of allegorical and mythological figures. (Photo by Helga Schmidt-Glassner, 1943/1945)

Bruchsal (Baden-Württemberg, Germany). Schloß, Hofkirche. Cosmas Damian Asam (1686–1739), The Legend of Saints Cosmas and Damian, 1730, nave ceiling fresco. Prince-Bishop Damian Hugo spared no expense when he hired one of Germany’s most celebrated fresco artists to decorate the church in the south wing of the new palace. (Photo by Helga Schmidt-Glassner, 1943/1945)

Bruchsal (Baden-Württemberg, Germany). Schloß, Hofkirche. Cosmas Damian Asam (1686-1739), Saint Luke the Evangelist, 1730, pendentive fresco. After their total destruction in 1945, the frescoes by Asam were not reconstructed when the church was rebuilt in a spare, modern style in the 1960s. (Photo by Helga Schmidt-Glassner, 1943/1945)

Dresden (Sachsen, Germany). Frauenkirche, south façade. Built from 1726 to 1743, the Frauenkirche was destroyed by Allied bombing in 1945, but rebuilt from 1996 to 2005. Slides showing the eighteenth-century inner dome frescoes in the Zentralinstitut’s Farbdiaarchiv were used as templates when the frescoes were reconstructed.

For views of the rebuilt Frauenkirche, see Image Collections' holdings.

Ingolstadt (Bayern, Germany). St. Maria de Victoria Kirche (Asam Kirche), interior view of nave. Built from 1732 to 1736, this church is a masterpiece of the Bavarian rococo. It was damaged during the war. (Hitchcock Rare Postcard Collection)

Ingolstadt (Bayern, Germany). St. Maria de Victoria Kirche (Asam Kirche), interior east view of the altar with Cosmas Damian Asam’s (1686–1739) fresco The Incarnation of the Lord, believed to have been painted in eight weeks in 1734. (Photo by Peter Cürlis, 1943/1945)

Köln (Nordrhein-Westfalen, Germany). Dom St. Petrus und Maria, interior of the nave from the west. On the left are the stained glass windows of the north aisle. Nineteenth-century albumen print from glass collodion negative. (Gramstorff Collection)

Köln (Nordrhein-Westfalen, Germany). Dom St. Petrus und Maria. Master of the Holy Kinship (active c. 1480–1520), Three Holy Kings Window, 1508. This detail shows the base of the window where sixteen coats of arms identify the founder of the cathedral and his ancestors. (Endangered German and Austrian Stained Glass Survey)

Potsdam (Brandenburg, Germany). Stadtschloβ. Built from 1662 to 1669 under Frederick William and expanded from 1744 to 1752 under Frederick the Great. This palace was an important example of Frederician rococo. It was destroyed in 1945 and recently reconstructed. (Philbrick Rare Postcard Collection)

Würzburg (Bayern, Germany). Furstbischofliche Residenz, garden façade. Built from 1720 to 1780, the palace was severely damaged in 1945, and reconstructed from 1945 to 1987. (Rare Postcard Collection)

Würzburg (Bayern, Germany). Furstbischofliche Residenz, staircase by Balthasar Neumann (1687–1753). The ceiling fresco by Giovanni Battista Tiepolo (1696–1770), an allegory of the planets and four continents created from 1752 to 1753, is considered the artist’s highest achievement. Remarkably, it was not damaged by the devastating March 16, 1945 air strike that burnt out most of the Residenz. (Rare Postcard Collection)

Würzburg (Bayern, Germany). Furstbischofliche Residenz, staircase fresco. The fresco by Giovanni Battista Tiepolo (1696–1770) covers an area 59 by 98 feet on the unsupported stone vault ceiling. The stone ceiling protected Tiepolo’s masterpiece from the fire ignited in the roof and attic above it by the 1945 air raid. Later, MFAA Officer John Davis Skilton (1909–1992), a former National Gallery of Art curator, ingeniously organized the building of a temporary roof above the fresco to save it from seeping rainwater. (Photo by Carl Lamb, 1943/1945)

Würzburg (Bayern, Germany). Furstbischofliche Residenz, staircase fresco. In Giovanni Battista Tiepolo’s (1696–1770) fresco, the continent of Europe dominates the other three continents in culture and civilization. Here the allegorical figure representing painting indicates with her brush that Würzburg is the cultural center of Europe. Tiepolo and his son Domenico, in a white wig, look on from the far left. (Photo by Carl Lamb, 1943/1945)

Würzburg (Bayern, Germany). Furstbischofliche Residenz, staircase fresco. In the center, the planets are presented as gods and goddesses from classical mythology, such as Luna the moon goddess pictured here. (Photo by Carl Lamb, 1943/1945)

Würzburg (Bayern, Germany). Furstbischofliche Residenz, Mirror Cabinet. Completed from 1740 to 1745, this precious room was one of the most original interiors created for the Würzburg Residenz. It was completely destroyed when roof fires caused by the Allied air raid of 1945 spread down through wood ceilings and floors from the attic. (Rare Postcard Collection)

Würzburg (Bayern, Germany). Furstbischofliche Residenz, Mirror Cabinet. This corner of the ceiling was decorated with gilded stucco and a painted relief of an allegory of Asia. (Photo by Carl Lamb, 1943/1945)

These selected images are part of the historic ‘Führerprojekt’, also referred to as Farbdiaarchiv zur Wand- und Deckenmalerei (Color Slide Archive of Wall and Ceiling Painting), an official Nazi archive of wall and ceiling frescoes that was produced by order of Adolf Hitler at the height of World War II. The department of image collections has a partial archival set of 3,572 35mm color ‘Führerprojekt’ slides, and 1,038 color slides from a separate stained glass survey, that came to the Gallery via publisher Kurt Wolff in 1951. A more complete set of 39,000 slides can be found in the Zentralinstitut für Kunstgeschichte, Munich.

In April 1943 Hitler issued the Führerauftrag Monumentalmalerei (Führer’s Order for Monumental Painting), which charged the Reich Ministry for Public Enlightenment and Propaganda with implementing and administering a photographic survey. The resulting images were meant to serve as archetypes from which to reconstruct war-damaged artworks after the anticipated Endsieg (Nazi final victory). The Ministry officials began by compiling lists of historic buildings within the Third Reich that they deemed to be culturally valuable and worth preserving, and ranked the sites in order of importance starting with those most threatened by potential Allied incursions. They then hired and trained photographers and equipped them with guidelines, cameras, lenses, film, and lighting devices, in some cases military searchlights for oversized ceiling frescoes, and arranged for scaffold builders and ground transportation. The Ministry anticipated that the program would produce a large volume of images, and so for efficiency they used Agfacolor Neu, a pioneering color slide film developed by the German company Agfa in 1936 that reduced processing from 27 to 5 steps.

At the time, the documentation program was considered prestigious and positions were highly desirable because they offered a degree of economic security and physical safety. The photographers came from a wide swath of German society: university professors, students and prominent art historians, photojournalists, chemists, and professionals from motion picture studios such as Rex-Film and UFA. By April 1945, survey photographers had documented the immovable paintings and wall treatments of 480 buildings dating from the tenth to the nineteenth centuries in Germany, Austria, Poland, and Russia. The campaign continued until the defeat of the Third Reich, although many of the photographers by then could barely cover their expenses, and 60 percent of the sites they photographed had been bombed.

Despite poor documentation of some sites and the loss of many slides in the chaos that followed the end of the war, the archive remains an invaluable resource for images of historic wall and ceiling paintings in central Europe.

This feature presents a selection of exterior and interior views of German patrimony in Berlin, Blaubeuren, Bruchsal, Dresden, Ingolstadt, Köln, Ludwigsburg, Potsdam, and Würzburg, where many monuments became casualties of war. All images are from the department of image collections, and from the Farbdiaarchiv set specifically, unless otherwise indicated.

See the complete list of sites represented in the Gallery’s Farbdiaarchiv.