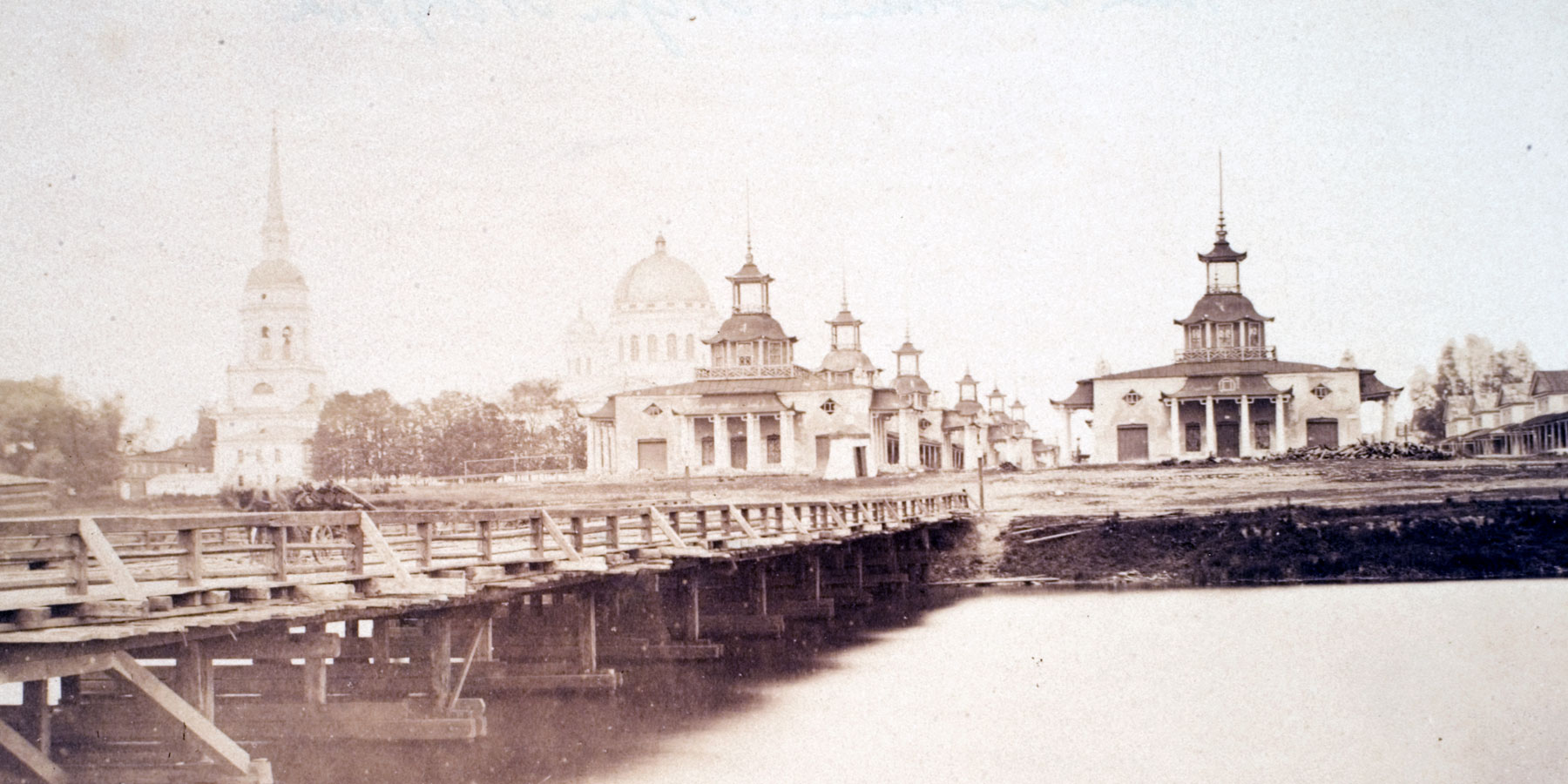 Among the many 19th-century photograph albums in the Department of Image Collections at the National Gallery of Art is this large volume of images collected by an English traveler, J. Guthrie Watson (c. 1850–1913), which documents his 1889 journey across the Russian Empire from Warsaw, Saint Petersburg, and Moscow to Crimea and the Caucasus. Images from this trip through what is now Ukraine, Georgia, Turkey, Azerbaijan, Turkmenistan, and Uzbekistan include views of local people and numerous sites of historic importance.

The arrangement and order of the photographs in the album (followed here) may suggest Guthrie’s route. It is possible he traveled on the Trans-Caspian Railway that follows the path of the Silk Road through much of western Central Asia. Its construction began in 1879 during the expansion of the Russian Empire and arrived in Uzbekistan in 1888, the year before Watson embarked on his trip.

This oversized album with J. Guthrie Watson’s initials in gilt on the cover was likely assembled upon his return to England. Although it is not certain how many of the views in this album were photographed by Watson himself, in 1899 he exhibited a collection of photographs at the Anthropological Institute in London. The following images are albumen prints, unless otherwise specified.

A member of the Conservative Club in London, Watson appears to have been a former military officer and was, in his words, “well acquainted with the Caucasus (particularly that portion known as Circassia).”

Hand-colored portrait of J. Guthrie Watson, the collector and possibly the photographer of some the images here, in ceremonial Cossack dress.

View of the monument to Alexander I (1777–1825) with the Winter Palace in background.

Tsarskoe Selo was an imperial residence south of Saint Petersburg.

Peterhof was an imperial residence in Saint Petersburg.

The Kingdom of Poland was subsumed into the Russian Empire in 1867. By the end of the 19th century, Warsaw had become the third-largest city of the empire after Saint Petersburg and Moscow. The Łazienki Palace (or Water Palace), originally built 1683–1689 from designs by Dutch-born Polish architect Tylman van Gameren, was entirely remodeled by Domenico Merlini in 1764–1795.

Moscow, Russia
Panorama, Red Square with the Cathedral of the Intercession on the Moat, the Redeemer’s Gate, and monument to Minin and Pozharsky (hand-colored)

This 17th-century birthplace of the founder of the Romanov dynasty, Tsar Michael I, was restored by order of Tsar Alexander II and opened as a museum in 1859.

The Tsar Bell (Tsarsky Kolokol III or Royal Bell) resides on the grounds of Moscow’s Kremlin. The first two Tsar Bells were destroyed by fire; this third bell was also damaged in a fire, during casting. It remained in the casting pit for nearly a century until it was raised in 1836 by French architect Auguste Ricard de Montferrand and placed on a stone pedestal. It has never rung.

This early 19th-century church was demolished by the Soviets, and rebuilt beginning 2007

Saints of the Pechersk Lavra from the Monastery of the Caves, Kiev, Ukraine (chromolithograph)

Dormition of the Virgin from the Monastery of the Caves, Kiev, Ukraine (chromolithograph)

Bohdan Khmelnytsky was a hetman (head of state) of the Zaporozhian Cossacks who liberated Kiev from Polish rule and is regarded as the father of the Ukraine.

Nizhny Novgorod, Russia
Panorama, Chinese rows of the Nizhny Novgorod Fair, 1817–1825, designed by Auguste Ricard de Montferrand. The Cathedral of the Transfiguration of the Savior is visible in the center background.

The Nizhny Novgorod Fair succeeded the Makaryev Fair, an annual commercial event which attracted international goods from all over Central Asia, Persia, and India. From the mid-16th century, the fair was held July to September at the Makaryev Monastery on the Volga River. In 1816, the fairgrounds were destroyed by fire and the fair moved to Nizhny Novgorod. Although damaged during the revolution and closed in 1929, the fair was revived in 1990.

Odessa was founded at the order of Russian Empress Catherine the Great in 1794. Its development was cultivated by Duc de Richelieu, who fled to Russia during the French Revolution and was appointed by Tsar Alexander I as the governor-general of the Crimea and governor of Odessa from 1803 to 1814.

Odessa, Ukraine
Nicholas Boulevard with the monument to Pushkin

The Siege of Sevastopol (September 1854–September 1855) was the last major military action of the Crimean War.

This cemetery commemorated the Allied dead from the Crimean War Siege of Sevastopol and was largely destroyed during World War II.

Yalta, on the north coast of the Black Sea in Crimea, became a popular resort for Russian nobility in the 19th century. Tsar Alexander III and later Nicholas II built palaces in the area, and literary luminaries Leo Tolstoy and Anton Chekhov also resided there.

Balaclava was the site of the 1854 Crimean War battle that included the fateful “Charge of the Light Brigade,” immortalized in the poem by Alfred, Lord Tennyson.

Ceded to Russia in 1829 after the Russo-Turkish War, the port of Novorossiysk was the capital of the Black Sea Governorate.

Novorossiysk, Russia
Panorama of ship struggling against the Bora, the violent wind off the Black Sea

By 1810, Russia claimed Sukhum Kaleh (Sukhumi) as a base in the northwest Caucasus.

Georgia joined the Russian Empire in 1801, with Tbilisi (Tiflis) becoming a governorate. As improved transportation connected Tbilisi to other cities in the Caucasus and Russia, Tbilisi reemerged as a cultural center, and was often visited by Leo Tolstoy, Pushkin, and other artists and statesmen.

After Georgia became part of the Russian Empire, this town southwest of Tbilisi, in the Lesser Caucasus, became a popular spa resort and home to Grand Duke Michael Nicolaievich, the governor general of Transcaucasia.

Mount Elbrus is the highest peak in the Russian Caucasus, and the highest mountain in Europe.

This Russian settlement in the Caucasus was founded in the late 18th century and by 1803 had become a popular mineral springs resort. The statue shown here is of Mikhail Yuryevich Lermontov, the Russian writer, poet, and painter who had been exiled to serve in the Russian cavalry in the Caucasus and was killed in a duel here in Pyatigorsk in 1841.

Russia established a fort at Vladikavkaz in the Caucasus in 1784. The city is now the capital of the Republic of North Ossetia-Alania, Russia.

Mount Ararat, Turkey
Panorama with a regiment of Cossacks

Mount Ararat on the Turkey-Iran border is the highest peak in Turkey. Judeo-Christian tradition identifies the mountains of Ararat as the spot where Noah's ark came to rest.

Erzurum, Turkey
Panorama with the Citadel

In 1813, Persia ceded Baku and most of the Caucasus to Russia. Located on the Absheron Peninsula on the west side of the Caspian Sea, Baku today is the capital and largest city of Azerbaijan.

Baku, Azerbaijan
View of the quai

The Baku area was rich in oil and, by the beginning of the 20th century, produced nearly half of the world’s supply.

Circassia was a nation that spanned the east Black Sea coast between Crimea and the Caucasus. By 1864, this area had been overrun by the Russian Empire—the population decimated and the few survivors refugees in the Ottoman Empire.

Mingrelia was a principality in western Georgia that was conquered by and subsumed into Russia in 1857.

Azerbaijani woman of a noble family from the Nakhchivan district

Although Watson mistakenly captions this photo as "Tartar Woman," this traditional tuman (skirt) and kyuladzha (outerwear) identify her as from the Nakhchivan region of Azerbaijan. The Nakhchivan Khanate came under Imperial Russian control in 1828, and today the area is the Nakhchivan Autonomous Republic, an enclave of the Republic of Azerbaijan, which shares borders with Armenia, Iran, and Turkey.

Dagestan (or Daghestan) in the north Caucasus came under Russian authority in 1803, although resistance to imperial authority continued sporadically throughout the 19th century. Today, Dagestan is a Russian republic.

In 1869, imperial Russia established a fort in Krasnovodsk. Since 1993 called Türkmenbaşy (or Turkmenbashi), this city on the eastern shore of the Caspian Sea was the western terminus of the Trans-Caspian Railway and an important transportation center.

This Caspian island seaport was the original starting point of the Trans-Caspian Railway (later moved to Krasnovodsk).

Ashgabat, or Ashkhabad, situated between the Kara Kum desert and the Kopet Dag mountain range, is the capital of Turkmenistan. Founded in 1881, the town was ceded to Russia by Persia after the Battle of Geok Tepe.

Merv was a major oasis-city on the historic Silk Road. Located near today's Mary in Turkmenistan, it has been inhabited since the third millennium BC.

Khiva (or Khorezm) became a quasi-independent protectorate of the Russian Empire after 1873.

Begun under the rule of Mohammed Amin Khan and left unfinished upon his death, this minaret was intended to be twice as tall, tapering to a domed gallery. Kalta-Minor means “short minaret.”

Bukhara (or Bokhara), on the Silk Road in Uzbekistan, has long been a center of trade, scholarship, culture, and religion.

Samarkand, Uzbekistan
View from the Citadel

Samarkand, on the Silk Road to China, is today the second-largest city in Uzbekistan. In the 14th century it was the capital of the empire of Timur (Tamerlane). Russia conquered the city in 1868 and by 1886 Samarkand became the capital of Russian Turkestan.

At the time this album was compiled, Russians used the term Sart to denote any of the settled peoples of Turkestan.

The Teke are one of the main Turkmen tribes. After the 1881 battle of Geok Tepe, in which the Teke were defeated, Turkmenistan became a part of the Russian Empire.

Musicians of the Khan of Khiva

The Khans of Khiva descended from Genghis Khan. In 1873, the Khanate of Khiva was became a Russian protectorate.