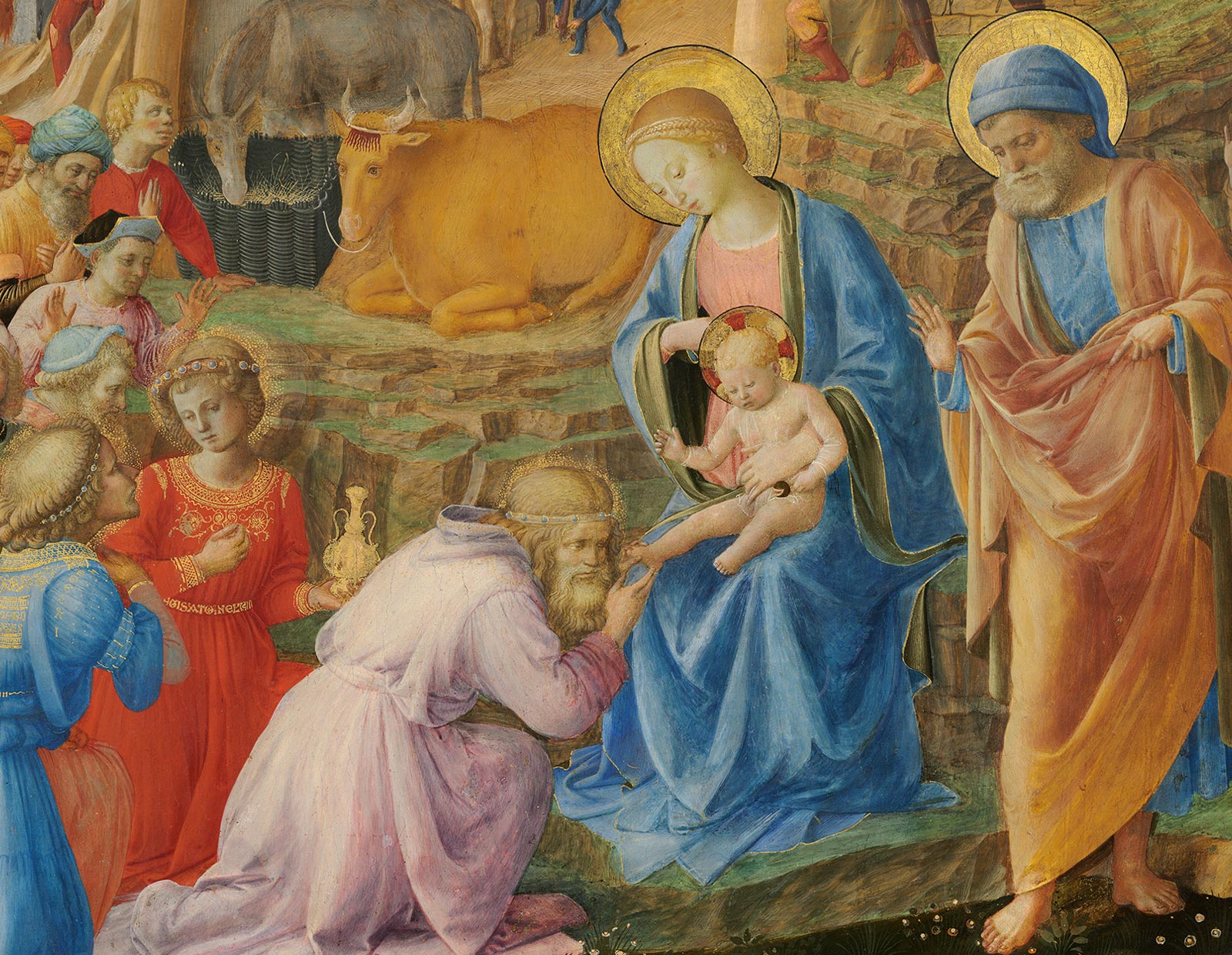 The Adoration of the Magi

In the large ground-floor bedroom called Lorenzo’s bedroom...a large tondo...our Lady and our Lord and the Magi who come to bring offerings, from the hand of Fra Giovanni, f. 100.

From an inventory of Lorenzo de’ Medici’s chambers, 1492

In all likelihood this brilliant painting, dazzling with color and movement, is the one that was inventoried in 1492 after the death of Lorenzo de’ Medici, “il Magnifico,” Florence’s equally brilliant leader. At 100 florins, it was the most valuable painting in the palace and had probably been a treasured family possession for 40 or 50 years. The person who compiled the inventory believed that the tondo was the work of , a favorite Medici artist. Scholars today, however, see more than one painter at work. The sweet delicacy of the Virgin’s face, for example, reveals the hand of Fra Angelico, who began his career as a manuscript illustrator, while the more robust figures of Joseph and the Three Kings point to his younger contemporary . In 1438, Cosimo de’ Medici, Lorenzo’s grandfather, wrote that the two artists operated the most sought-after workshops in Florence. Probably, the panel was begun by Fra Angelico around 1440 but was left unfinished. After his death, some 20 years later, Fra Filippo, who had assumed the older artist’s mantle as Medici favorite, likely took up the commission. Other painters in the two artists’ busy shops may also have contributed.

The Medici and the Magi

Within a bustling and crowded scene, many details help tell the story of the Magi and expand meaning.

The crumbling architecture alludes to the end of the old pagan order brought about by Jesus’ birth.

The peacock, whose flesh was thought to be incorruptible, suggests the Resurrection and the promise of eternal life.

The nudes standing on the walls remain mysterious. Perhaps they are people who were formerly outcasts but who are now brought into the welcoming fold of the new religion.

The star that guided the Three Kings, although unseen, is suggested by a man's amazed upward gaze.

The many seeds of the pomegranate held by the infant refer to the Church’s sheltering of the many souls of believers.

The Medici, de facto rulers of the ostensibly republican Florence, were among the greatest art patrons of any era. They had a particular interest in paintings that depicted the Adoration of the Magi, the moment when the Three Kings, led by a miraculous star, discovered the Christ child. This event signified the recognition of the holy infant by the secular world and was celebrated in the feast of the Epiphany (from Greek, to manifest). Florence had mounted an Epiphany festival on January 6 at least since 1390, date of the earliest surviving record of it. The elaborate pageant, in which men reenacted the journey of the Magi through the streets of the city, must have looked much like the colorful throng that winds through the painting. By 1417 the festival was directed by a lay confraternity, the Compagnia de’ Magi, with funds donated by the Medici. Male members of the family participated in the procession, which passed in front of the Medici palace and began and ended at the church of San Marco, headquarters of the confraternity and an important recipient of Medici munificence. Cosimo had an image of the Adoration of the Magi in his private cell within San Marco. Lorenzo even changed the date of his birthday from January 1 to coincide with the feast on January 6.

The tondo format appeared in Tuscany as early as the 1403s and was used well into the 16th century, primarily for images of the Virgin and Child. Probably, the form is linked to the desco da parto, a birth tray, typically round, that was given to celebrate births and was used to bring refreshment to new mothers—a natural fit for images of the Virgin and child and, even more, with the Adoration of the Magi. It is possible that the tondo shape is an innovation associated with the Medici; the first known tondo, also an Adoration of the Magi, was a Medici commission. And, although the tondo’s circular shape can be seen as generally symbolizing perfection and eternity, it might also relate to the Medici device of a diamond ring.

Most tondos were apparently made for the home, as was this one depicted in the bedchamber of a dying man. The image illustrated a sermon on the subject of “dying well”—a preoccupation from the Middle Ages into the Renaissance—by Florence’s fiery preacher Girolamo Savonarola. Savonarola believed that images could reinforce faith and suggested the faithful should look on them daily and at the moment of their death. He wanted his sermon published with woodblocks to provide such images in an inexpensive form.

This desco da parto was created to celebrate the birth of Lorenzo de’ Medici. The front bears a scene based on Petrarch’s I trifone (The Triumphs). In this case, the particular triumph illustrated—Fame—could hardly have been more prescient. On the reverse is the baby’s father’s device of a diamond ring with feathers, paired with the coats-of-arms of his mother Lucrezia Tornabuoni. The kneeling friar on the left who looks out of the painting is presumed to be a self-portrait.

Baptized as Guido di Piero, the artist we know today as Fra Angelico took the name Fra Giovanni when he entered the Dominican order some time between 1417 and 1425 at Fiesole, near Florence. It was not until the 19th century that he was routinely called Fra Angelico, from an early epithet, pictus angelicus (angelic painter). The description, it seems, was apt, for both his art and his character. Giorgio Vasari wrote of him in the 16th century: “It is impossible to bestow too much praise on this holy father, who was so humble and modest in all that he did and said and whose pictures were painted with such facility and piety.” The artist, who was offered but refused the position of Florence’s archbishop, was formally beatified in 1982 by Pope John Paul II.

Little is known of Fra Angelico’s early life, but it seems that he and his brother worked in a scriptorium, Fra Angelico as an illuminator, his brother as a scribe. Fra Angelico’s paintings on panel share the luminous color and delicacy of manuscript illustrations, and he continued to model forms with color and light rather than the shadows of chiaroscuro. His works have exceptional naturalism, and he employed perspective in innovative ways to create convincing architectural settings. Fra Angelico’s figures convey deep human sentiment that was a natural expression of his own piety. Although many of his greatest works were made for religious patrons, especially his own order, his plentiful clientele also included the Medici and other powerful Florentine families. By the 1430s he was running Florence’s largest and most sought-after workshop. He exerted a significant influence on other artists, including Filippo Lippi, before he was called by the pope in 1445 to work in Rome. He also completed commissions in Orvieto and Perugia, and served as the prior of the convent in Fiesole between 1450 and 1452. He died in Rome in 1455.

Filippo Lippi was born around 1406 in Florence, one of many children of an impoverished butcher. Orphaned at a very young age, he and a brother were sent to the Carmelite monastery; Filippo may have been as young as eight. In 1421, he took the vows of a Carmelite monk, entering a religious life for which he was wholly unsuited. Next to nothing is known about his training as an artist, but it must have been within the monastery. He apparently showed early talent: Giorgio Vassari, the 16th-century artist and biographer, reported that Filippo’s schoolmasters found him doodling instead of working at lessons, filling his notebooks and those of fellow students. During 1424 and 1425, he would have been in position to study firsthand a series of groundbreaking frescoes being completed in the Brancacci chapel of the Carmelite church. These innovative works by and used strong, consistent light to model figures with shadow and give them robust three-dimensionality. They also put into practice Brunelleschi's theories about how to project depth beyond a flat painted surface. Filippo’s earliest paintings, from the late 1430s, share some of the austere monumentality of Masaccio’s work, but his style later became more ornate and linear.

Filippo was among the first Italian painters to be influenced by Netherlandish artists, whose paintings were brought south by Italian bankers and merchants with business in the north. Not only did Filippo respond to the Netherlandish artists’ highly detailed and realistic portrayal of surfaces—from crystal vases to richly brocaded fabric—he was the first Italian painter to adopt the northern practice of depicting the Virgin and Child in the domestic settings of contemporary life. Filippo was also among the earliest Italian painters to create independent portraits, perhaps, again, following models from the north. From the 1440s, his work was increasingly influenced by the more delicate and refined style of his contemporary Fra Angelico.

NGA Images
Download a digital image of this work

Filippo enjoyed the patronage of Cosimo de’ Medici, and the support of Florence’s most powerful family proved crucial to the artist, whose personal and business lives were fraught with problems. After Filippo had been appointed chaplain of a convent in nearby Prato, he began a long relationship with one of its residents, Lucrezia Buti. She was the model for several of his Madonnas. The two lived together openly between 1456 and 1458 and had a son, the painter Filippino Lippi. The scandal was compounded by civil complaints. Patrons claimed that Flilppo did not fulfill his contracts, and an assistant accused him of withholding wages. At one point, he was tortured on the rack. Even the Medici had difficulties with the artist, once holding him in “protective custody” within the palace so Filippo would complete a commission. He escaped. Finally, with help from Cosimo and the humanist pope Pius II, Filippo was allowed to leave his order. He and Lucrezia married and had one more child, a daughter.

All the while, Filippo maintained one of the two busiest workshops in Florence and enjoyed high regard as an artist. He trained his son and Botticelli and took on major commissions in Florence and elsewhere. A large number of his paintings survive. Even after he left the order, Filippo continued to sign his work Frater—brother.