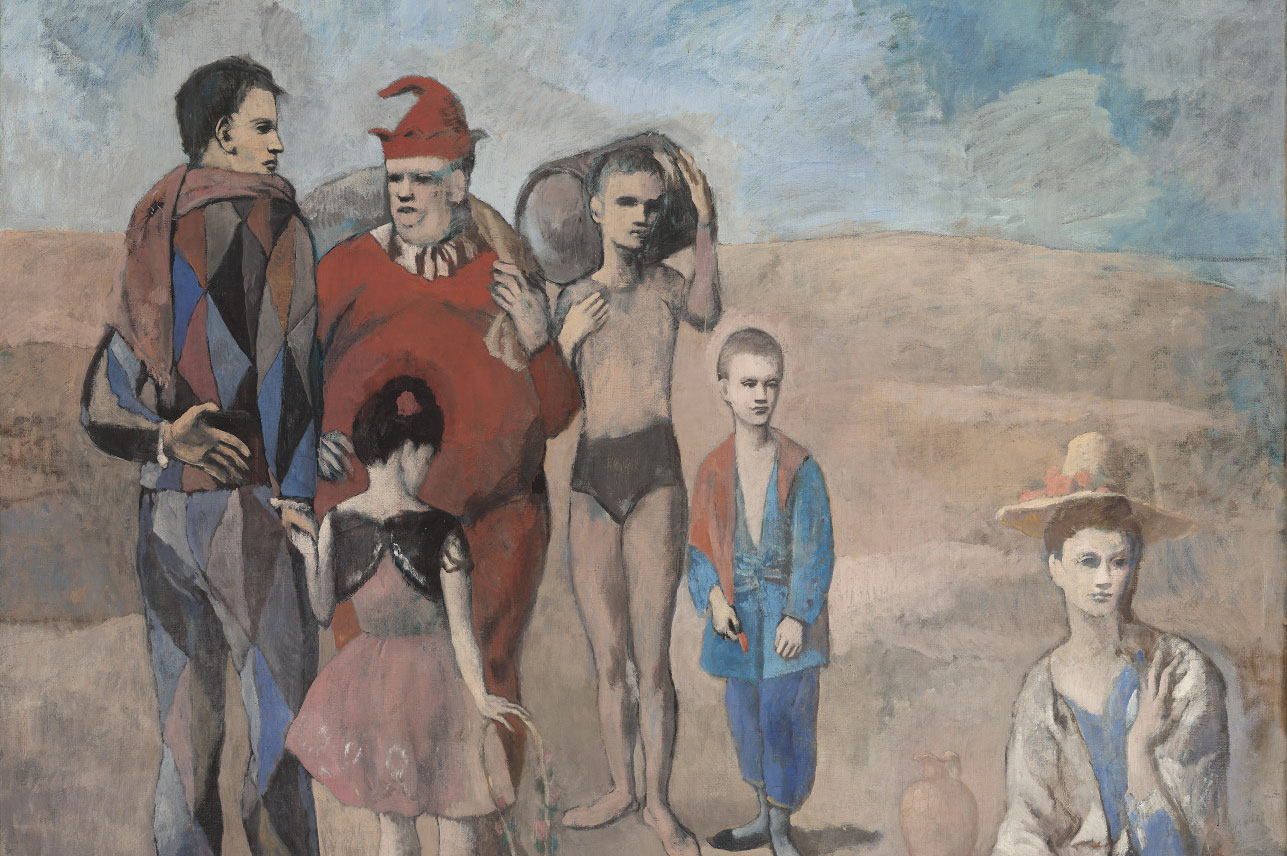 Measuring 7 by 7.5 feet, is the most important painting made during his early career. Immediately obvious is the isolation and stillness of its figures. Shouldn’t these acrobats, dancers, and jesters suggest the frolic or at least the forced gaiety of circus performance?

That was not what Picasso had in mind. For him, these wandering saltimbanques stood for the melancholy of the neglected underclass of artistes, a kind of extended family with whom he identified. Like them, the Spanish-born Picasso was transient during his first years in Paris while striving for recognition. Eventually he found a dilapidated apartment in Montmartre, where he and his friends regularly attended the local Cirque Médrano’s performances. Picasso made many images of circus performers in 1904–1905, most of them representing couples with their babies and troupe animals, posed “portrait” images, and figures at practice.

The stark background he assigned to this work casts a haunting sense of loneliness on these vagabond performers. Its chalky, rose-blue palette may reference the colors of actual circus costumes of the time while setting a mood of ethereal sadness.

The original tonality of this painting was bluish. Scientific study has revealed three other states of this image under its final version. In them, Picasso altered figures and composition and switched from blue to rose, consciously allowing the darker paint to show through as he reworked his canvas. In this way, he created contour as well as a dusky, veiled atmosphere worthy of his waif-like figures.

After shattering representational tradition through cubism, which he developed with Georges Braque, Picasso became the artistic visionary against whom most others measured their creativity throughout the 20th century.

The son of an artist, Picasso attended art schools in his native Spain and in his late teens aligned his sensibilities with bohemian writers and artists in Barcelona and Madrid who opposed Spain’s stalled social hierarchies and conservative culture.

After early work inspired by international models—the anguished, attenuated figures of El Greco, the dark, moody outlines of symbolism, and the sinuous curvatures of art nouveau to name a few—Picasso began to find his own vision. The art he made in the decade between 1905 and 1915 unleashed a torrent of originality—Rose and Blue Period pieces that probe the emotional depths of his personal experiences and identity; masklike portraits and heavily faceted nudes that translate classical and primal aspects of ancient, Iberian, and African cultures, culminating in Les Demoiselles d’Avignon (1907); and the cubist and collage works which, in their fragmentation of illusionism, delivered Picasso’s breakthrough.

In his last decades Picasso took on the great masters—pitting his print, watercolor, and painted works against signature images by Nicolas Poussin, Louis Le Nain, Diego Velázquez, Rembrandt van Rijn, Édouard Manet, and others—just as artists who followed Picasso would test themselves against his example. Pablo Ruiz Picasso died in 1972 at age 91.

Crépuscule, a poem by Picasso's friend and writer Guillaume Apollinaire

During his early years in Paris Picasso was so close to his writer and poet friends that he penned “Au Rendez-vous des poètes” on the door of his Montmartre apartment. Here, the poem Crépuscule (Twilight) by Guillaume Apollinaire, poet and writer as well as Picasso’s friend, artistic champion, and fellow spectator at performances of the Cirque Medrano.

Audio
Picasso: The Saltimbanques - chronicles the scientific study that revealed three iterations of this image which together comprise the artist’s final painting