Fragonard sketched many of his fantasy figures on this sheet. The drawing surfaced in Paris in 2012 and provided some answers to long-standing questions regarding the fantasy figures: Who are these people? Are they imaginary portraits? Or are they likenesses of real people? Beneath all but one sketch, Fragonard penned abbreviated names of the paintings’ sitters or patrons. These names appear to correspond to individuals from his circle of friends, acquaintances, and clients. Including members of the nobility, financiers, socialites, writers, singers, and fellow artists, they indicate the breadth of Fragonard’s social network. 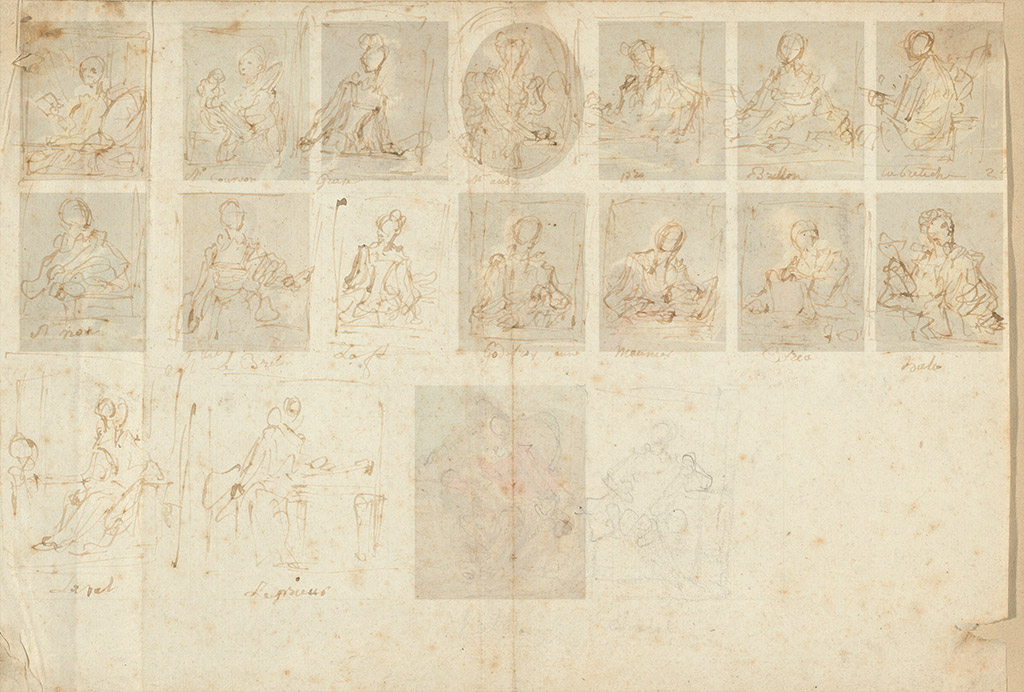 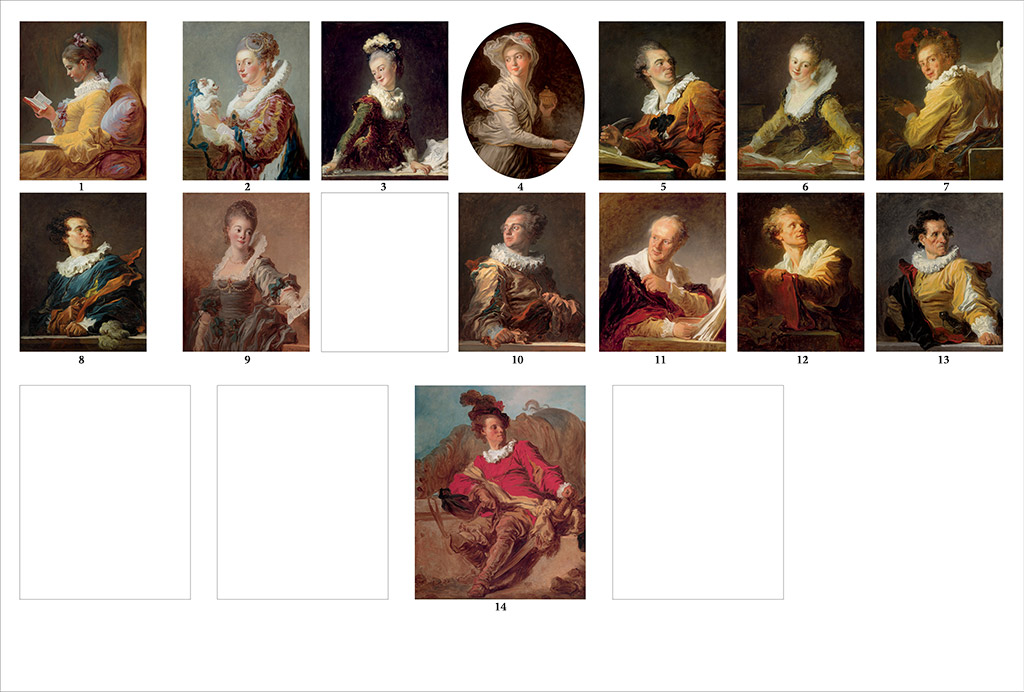 To see the painted portraits that correspond to the sketches, drag the arrow bar back and forth to toggle between the two. Scroll down to learn more about these individuals.

The identifications of the people Fragonard portrayed as fantasy figures are often speculative due to his brief notations, hurried handwriting, and phonetic spellings.

All the painted fantasy figures are in oil on canvas and date to about 1769.

This is the only sketch to lack a name. To learn more, go to Young Girl Reading: A Hidden Painting Revealed.

The inscription “Me Courson” (short for “Madame de Courson”) suggests that this portrait depicts Marie Émilie Coignet de Courson (1727–1806), who likely commissioned it. A wealthy aristocrat from a noble Burgundian family, she was a prominent figure on the Parisian social scene. Madame de Courson was also a close friend of another of Fragonard’s probable sitters, the countess Marie Anne Éléonore de Grave (1730–1807), whose portrait is represented on the drawing by the figure marked “Grave” (no. 3).

3. Portrait of a Woman

The sketch and painting may represent the countess Marie Anne Éléonore de Grave (1730–1807). She inherited the worldly possessions of her close friend Madame de Courson, including the fantasy portrait known as Woman with a Dog (no. 2).

This portrait presumably represents Catherine Thérèse Aubry (1733–1800), the widow of the president of the Bureau of Finances in the city of Tours. The woman’s white dress and veil, inspired by classical antiquity, prompted the portrait’s traditional title, The Vestal, which refers to the virginal priestesses of ancient Rome.

Possibly this portrait of a man holding a quill pen represents the publisher Louis François Prault (pronounced “pro” in French; 1734–1807), seated at his desk, evidently at work on a manuscript. Anne-Louise captivated Benjamin Franklin, who traveled to Paris in 1776 to gain support for his country’s independence from Britain. He briefly lived in her home and the two engaged in a lengthy, flirtatious correspondence. Madame Brillon likely introduced Franklin to Fragonard, who drew his portrait.

Louis Richard de La Bretèche (1722–1804) was the receiver general of finance for the city of Tours and the older brother of the abbé de Saint-Non (no. 8), the subject of another fantasy figure. An old label on the back of the painting states that it portrays “Mr de La Breteche, / painted by Fragonard, / in 1769, in one hour’s time.”

At the age of 20, Fragonard won the prestigious Prix de Rome, an award from the Royal Academy of Painting and Sculpture that allowed him to travel and study in Italy. There he met Jean-Claude Richard (1727–1791), the abbé de Saint-Non, who became a close friend and patron. An artist, collector, and travel writer, Richard authored Voyage pittoresque de Naples et de Sicile (Picturesque travels in Naples and Sicily), published in Paris in the 1780s with drawings by Fragonard. The title abbé, meaning abbot, was largely honorary, without ecclesiastical authority. An old label on the back of the painting states “Portrait of Mr l’abbé de St Non, / painted by Fragonard, / in 1769, in one hour’s time.”

The woman depicted here holding a musical score has been associated with Anne Pauline Le Breton (1749–1821), a music lover who played the harpsichord. She apparently traveled in the same social circles as M. de La Bretèche (no. 7) and the abbé de Saint-Non (no. 8).

Though traditionally titled The Actor, this portrait is thought to represent Gabriel Auguste Godefroy (1728–1813), the son of a wealthy Parisian banker, jeweler, and art dealer. Alternately a banker and naval officer, the younger Godefroy assembled a collection of paintings that included works by Fragonard.

The inscription “Meunier” beneath the sketch was a startling discovery, as the corresponding painting had long been thought to portray the writer, art critic, and Enlightenment philosopher Denis Diderot (1713–1784). The portrait of a man leaning against a book may represent instead the author and journalist Ange Gabriel Meusnier de Querlon (1702–1780). This portrait of a man with a portfolio of drawings has been identified as Charles Paul Jérôme Bréa (1739–1820), an art dealer, pastel artist, and miniaturist. Bréa’s appearance is also known from a portrait of him by Peter Adolphe Hall (1739–1793). The similarities between the facial features in the two works strongly suggest that they represent the same person. Bréa, shown with his natural hair in Fragonard’s portrait, donned a formal powdered wig for Hall’s painting.

While similarities exist between the sketch and this painting, known as The Warrior, the inscription raises doubts about their association. The name “hale” or “hall” has been linked to Fragonard’s friend, the miniaturist Peter Adolphe Hall, who owned some twenty works by the artist, including a painting Hall described as a “head done after me from the time when
[Fragonard] was doing portraits in one go.” However, other contemporary portraits indicate that Hall did not resemble the man represented in this portrait. The sketch may illustrate another, presumably lost, painting of a different sitter.

14. Cavalier Seated by a Fountain The sketch corresponding to Cavalier Seated by a Fountain is barely legible, as it was rendered in graphite rather than ink. The image below at left accentuates the drawn outlines. The sitter may be the financier Geoffroy Chalut de Vérin (1705–1787), who befriended Benjamin Franklin while the American statesman was in Paris to gain support for his country’s independence from Britain. The painting made its first public appearance at the 1777 Paris sale of the collection of Chalut de Vérin’s brother-in-law.