A question long posed of this painting has been, “Does it represent one of Fragonard’s fantasy figures?” Its dimensions, palette, and energetic brushwork conform to those of the known works in the group, as does the girl’s pseudo-Spanish costume with its elaborate ruff collar. Yet the other fantasy figures assume dramatic poses and turn their faces to meet the viewer’s gaze, whereas the girl in the Gallery’s painting is shown in quiet repose, turned in profile, enraptured by her book, oblivious to viewers. Recent technical studies and the discovery of the related drawing provide some answers.

In 1985 Gallery conservators the painting to peer beneath its current surface. They discovered that Fragonard had painted the head of over a preexisting portrait, possibly representing a man whose face is in three-quarter view, looking out to the viewer.

Fragonard’s Sketches of Portraits includes a drawing that closely resembles , suggesting that the painting once depicted a fantasy figure. As in the painting, the girl in the sketch is seated by a window, indicated by the railing on which she rests her elbow, and leans against a large pillow while holding up a book in her right hand. In the sketch, however, her head is turned toward the viewer, showing that the drawing relates not to the current portrait, in which the girl appears in profile, but to the underlying portrait seen in the x-radiograph, now understood to represent a woman rather than a man. 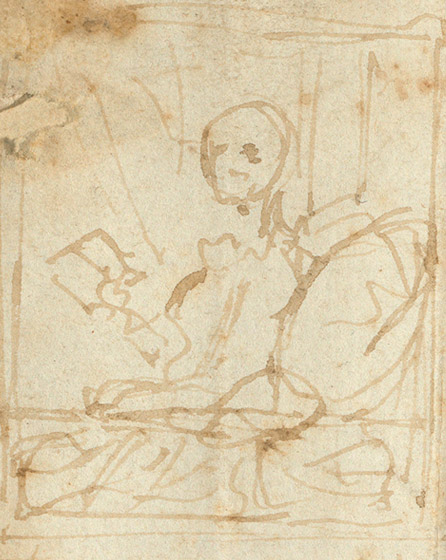 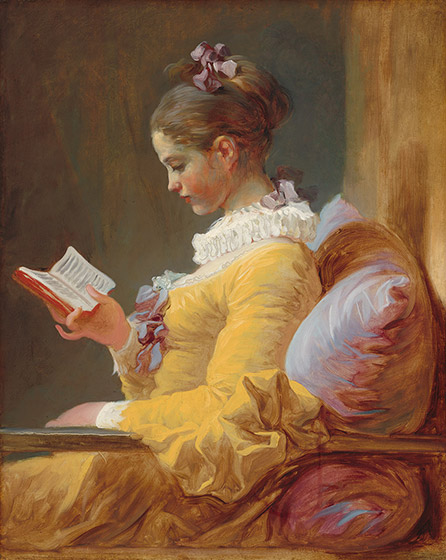 In 2012–2013 a team of researchers at the Gallery used more sophisticated imaging techniques to gain a clearer view of the underlying portrait. This x-ray fluorescence (XRF) image reveals that it indeed depicted a woman. In addition, it became clear that this former figure wore a large feathered headdress. The solid black lines indicate tears in the canvas that were repaired at an unknown date.

This overlay of details from an x-radiograph and a hyperspectral shows more clearly the two faces superimposed.

Why did Fragonard repaint this portrait? On Sketches of Portraits, the artist inscribed names below every portrait except this one. Perhaps the sitter or patron rejected the painting and Fragonard repainted it for the art market, turning a portrait of a specific individual into a general scene from daily life that might appeal to any prospective buyer.