The works in the East Sculpture Hall span some 250 years of French history, from before the birth of Louis XIV to the Second Empire. During those years, both artistic styles and the sources of patronage changed dramatically. Voltaire maintained that "sculpture reached perfection under Louis XIV." At Versailles alone, more than 36,000 laborers and 6,000 horses worked for almost fifteen years to transform the king's small hunting chateau into Europe's most magnificent and influential palace. Their efforts were unified by the artistic supervision of Charles Le Brun, whose grandiose classicism stamped the entire output of French art in the late 1600s.

In the next century, new patrons and a more relaxed atmosphere ushered in the lighter rococo style. Louis XV shunned the formality of his great-grandfather's court, and sculptors, like other artists, turned to more intimate subjects portrayed with a delicate touch. Royal and public commissions gave way to smaller-scale works made for private patrons. After the mid-1700s, however, the restraint and discipline of neoclassicism began to replace the frivolity of rococo. All the arts were strongly influenced by the sculpture of ancient Greece and Rome, enhancing the status of sculptors and their craft. Napoleon himself was said to have remarked, "If I weren't a conqueror, I would wish to be a sculptor."

By 1867, when the latest of the statues here was completed, sculptors no longer relied solely on commissions. Increasingly they made works to show at the official Salon exhibitions, where they could be admired by the public and ultimately purchased by collectors. It also became more common for sculptors to make multiple copies of their most successful works, often in a variety of media, and to create variants of them. 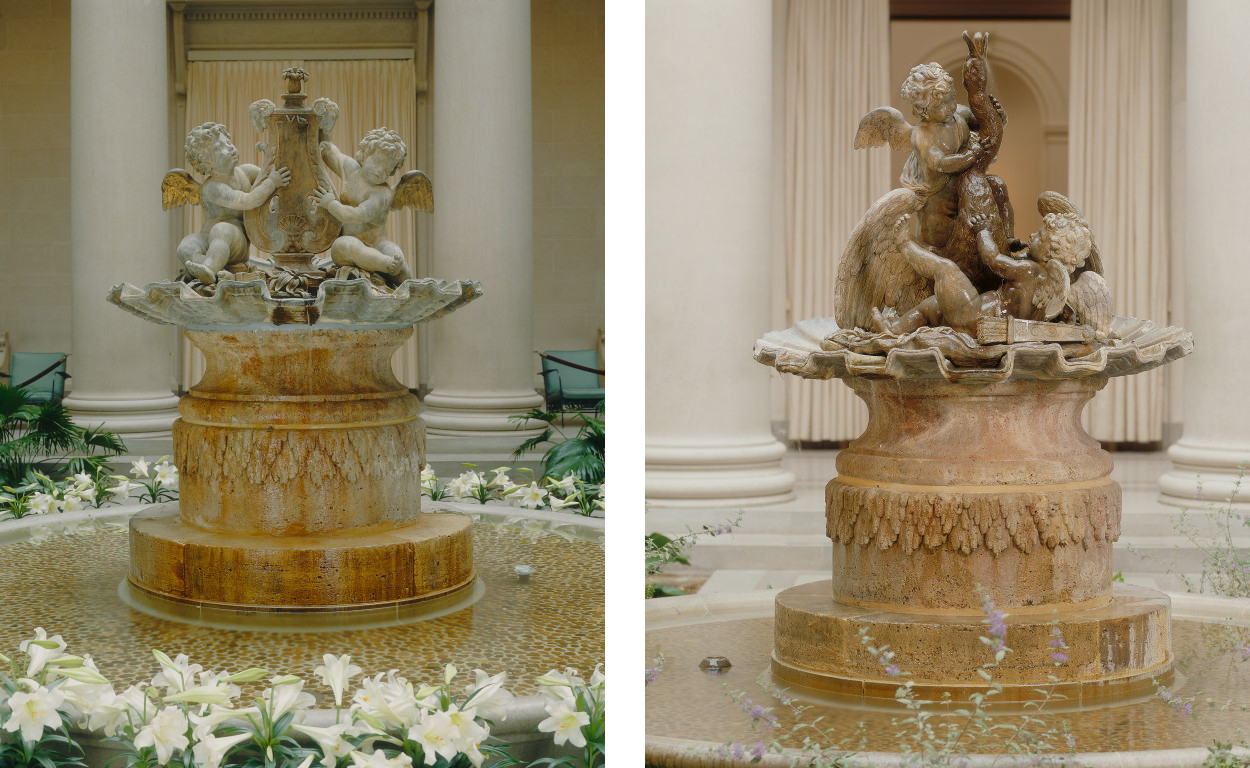 The two sculptures decorating the East and West Garden Courts at the National Gallery of Art were originally created as garden fountains for Versailles. Pierre Legros' Cherubs Playing with a Lyre (in the east court) and Jean-Baptiste Tuby's Cherubs Playing with a Swan (in the west court) were executed in lead and completely gilded (traces of the gold are still visible), following designs sketched by Le Brun. They were installed in Louis XIV's théâtre d'eau ("water theater"), a spectacle of fountains and cascades laid out to suggest an aquatic amphitheater. The project was so costly to maintain, diverting nearly all the water from nearby villages, that it was disassembled by Louis XV. In the National Gallery's installation, the flow of the water, which originally shot up many feet, has been redirected and reduced.

Holding a sword and olive branch, this figure represents Justice. It was commissioned to decorate a monument in which the hearts of French king Henry IV and his queen, Marie de'Medici, were entombed at the Jesuit College of La Flèche.

Though the project was never completed, a drawing for it indicates that this figure, placed on the right corner, would have gazed in the direction of the king and queen, whose statues were planned for the center. This is the only figure from the monument known today and may have been finished later by another artist. That would explain the differences between this work and others by Prieur, which tend, for example, to have more voluminous drapery than Justice's form-fitting doublet. Her idealized features, smooth surfaces, and dignified, still pose are all characteristic of the classicizing taste in French sculpture during the early 1600s.

While the sword that the figure holds is a common attribute of Justice, the olive branch is more often associated with Peace. Their combination here may suggest that France, after decades of bloody religious wars between Protestant Hugenots and Catholics, wished to see peace as an aspect of justice.

The small watering pitcher held by the female figure identifies her as a personification of the dew; the butterfly-winged boy is Zephyr, the gentle west wind. The sculpture may have been designed for the gardens of the royal pavilion of Louis XIV's chateau at Marly, but was apparently never installed there. In 1762 it was at Louis XV's Chateau de la Muette. An inventory described the work as having been begun by Massou, continued by Flamen, and completed by Rebillé. The problems of attribution are still being studied, complicated by the fact that Flamen's and Massou's sons were also sculptors and that there were two contemporary artists named Rebillé, neither very well known.

The sculptures made for Marly were noted for a new freedom in style. The figure of Dew shares their easy movement and intimacy, but her elongated proportions, light drapery, and supple grace suggest that she may have been the work of the next generation of sculptors.

This sculpture was one of a large group commissioned from several artists to represent the nymphs who attended the hunt-goddess Diana. Among the last of Louis XIV's great sculptural projects, the assemblage was designed for the gardens at Marly, his retreat from the rigorous formality of Versailles and a favorite hunting ground.

Lemoyne began work on his statue in 1710, but did not finish before Louis' death in 1715, by which time the project had languished. Lemoyne completed this work in 1724, and it was eventually installed in the garden of the new king's Chateau de la Muette. In the warmth and animation of Lemoyne's nymph, perhaps his finest work, are indications that he was among the first to embrace the delicacy of the new rococo style, which emerged in the early years of the eighteenth century. The figure's body is long and elegant, lightly draped, and enlivened by a dancelike pose. Her downward gaze toward the hound, who licks her thigh, introduces a note of intimacy tinged with eroticism typical of rococo.

Lemoyne's reputation as a sculptor rested largely on his portraits as did that of his more famous son, Jean-Baptiste II Lemoyne, one of whose portrait busts is also in the Gallery's collection.

A Latin inscription identifies this figure as Calliope, muse of epic poetry.

Although Pajou was known to have carved several muses as garden decorations, this work is unsigned and its attribution still being studied. The sculptor shows a natural affinity for the calm restraint of neoclassicism, which grew in popularity in the later decades of the eighteenth century. Compare the quiet silhouette and dignified stance of Calliope with the complex twisting motion of Lemoyne's Companion of Diana. Calliope's drapery falls heavily, while the nymph's swirls around her. The linear folds that cling as if damp to Calliope's torso recall ancient Greek sculpture, which was increasingly admired in the late eighteenth century.

Pajou, who came from a family of minor sculptors, was among the busiest artists of his generation. He was a favorite of Madame du Barry, Louis XVI's mistress, and received a number of royal and public commissions, but he is perhaps best known for his portrait busts. These brought him many private patrons, and, unlike many other artists, he was able to accommodate a new clientele after the revolution.

With Clodion's Poetry and Music, this allegory was one of four that were meant to bring to life the abstract concepts of the arts and sciences. They were commissioned by Louis XV's finance minister Abbé Terray for his elaborate Paris residence. The subject was an appropriate one for Terray, since he also served briefly as the director of the king's buildings with overall responsibility for the state of the arts in France. Painting, sculpture, music, and literature are celebrated by the young cupidlike figures in the two works here; other children carved by two other artists represented geometry, geography, architecture, and astronomy.

Terray is representative of the private patrons who transformed the monumental public works of the preceding century into the more intimate works admired by eighteenth-century collectors. He was among the most unpopular of all Louis XV's ministers, accused of excessive luxury. When he was swiftly dismissed by the new king after Louis XV's death in 1774, a Parisian mob burned him in effigy. Public opinion notwithstanding, he seems to have tried to make much-needed economies in public spending, reform taxes, and reduce bloated state pensions.

This work, along with Tassaert's Painting and Sculpture, was one of four representations of the arts and sciences commissioned by Louis XV's finance minister, Abbé Terray.

It was Clodion who arranged for the expensive Carrara marble used for all of Terray's statues, urging his source not to divulge the name of his unpopular client. Clodion had lived in Italy for nine years after winning the Prix de Rome. A vision of antiquity he acquired while in Italy — a wooded Arcadia where young satyrs and nymphs cavort — continued to be his greatest inspiration. After his return to Paris, these subjects delighted the aristocratic and wealthy bourgeois clients who flooded him with commissions to decorate their homes.

Clodion prepared a terracotta model for Poetry and Music, which is in the National Gallery and frequently on view in the ground-floor sculpture galleries. It provides a rare chance to compare an artist's model with the final version in stone. In this case, Clodion modified the figure of poetry, "correcting" it to adhere to traditional representations: the terracotta figure had rested his head in his hand, but here he holds a writing stylus.

Clodion is best known today and was most celebrated in the eighteenth century for works of vivacity and charm. The relief panels decorating these urns, one of which is illustrated here, are typical of his engaging subjects: satyr families tussle and frolic in bucolic settings, playing music, and riding seesaws. The scenes on the urns include some of Clodion's most popular vignettes, which he copied many times in terracotta (including a plaque often on view in the downstairs sculpture galleries) and other media, and which are even found as gilded decorations on furniture. Clodion had an active workshop and was so busy that he failed even to complete the masterpiece for his admission to the French Academy. Probably the urns were carved not by Clodion himself, but by workshop assistants following terracotta models provided by the master, a common procedure in the eighteenth and nineteenth centuries.

One of Clodion's most beautiful carvings, a Vestal Virgin made for the Russian empress Catherine the Great, can be seen in the ground-floor galleries. This solemn and heavily draped figure contrasts with the playfully sensuous figure style on these urns.

Carpeaux received many important public commissions, but, like other sculptors of his day, increasingly made uncommissioned works on speculation. Neapolitan Fisherboy, for example, was a subject Carpeaux had submitted in plaster to the French Academy while a student in Rome. He carved this marble version several years later, showing it eventually in the Salon exhibition of 1863. It was purchased, perhaps even before leaving Italy, for Napoleon III's empress, Eugènie. The work was enormously popular, and Carpeaux created a number of reproductions and variations in marble and bronze. Some years later, capitalizing on its success, he made the Girl with a Shell, also in the Gallery's collection, as a pendant.

Carpeaux challenged the academic tradition, which was still dominated by the influence of ancient sculpture. He sought subjects in the streets and treated them with decidedly unclassical vigor, demonstrated here in the boy's vitality, detailed anatomy, and intricately balanced pose. Carpeaux claimed that he based the Neapolitan Fisherboy on a boy he had seen during a trip to Naples, giving French audiences an exotic glimpse of the spontaneity and excitement found in Italian life.