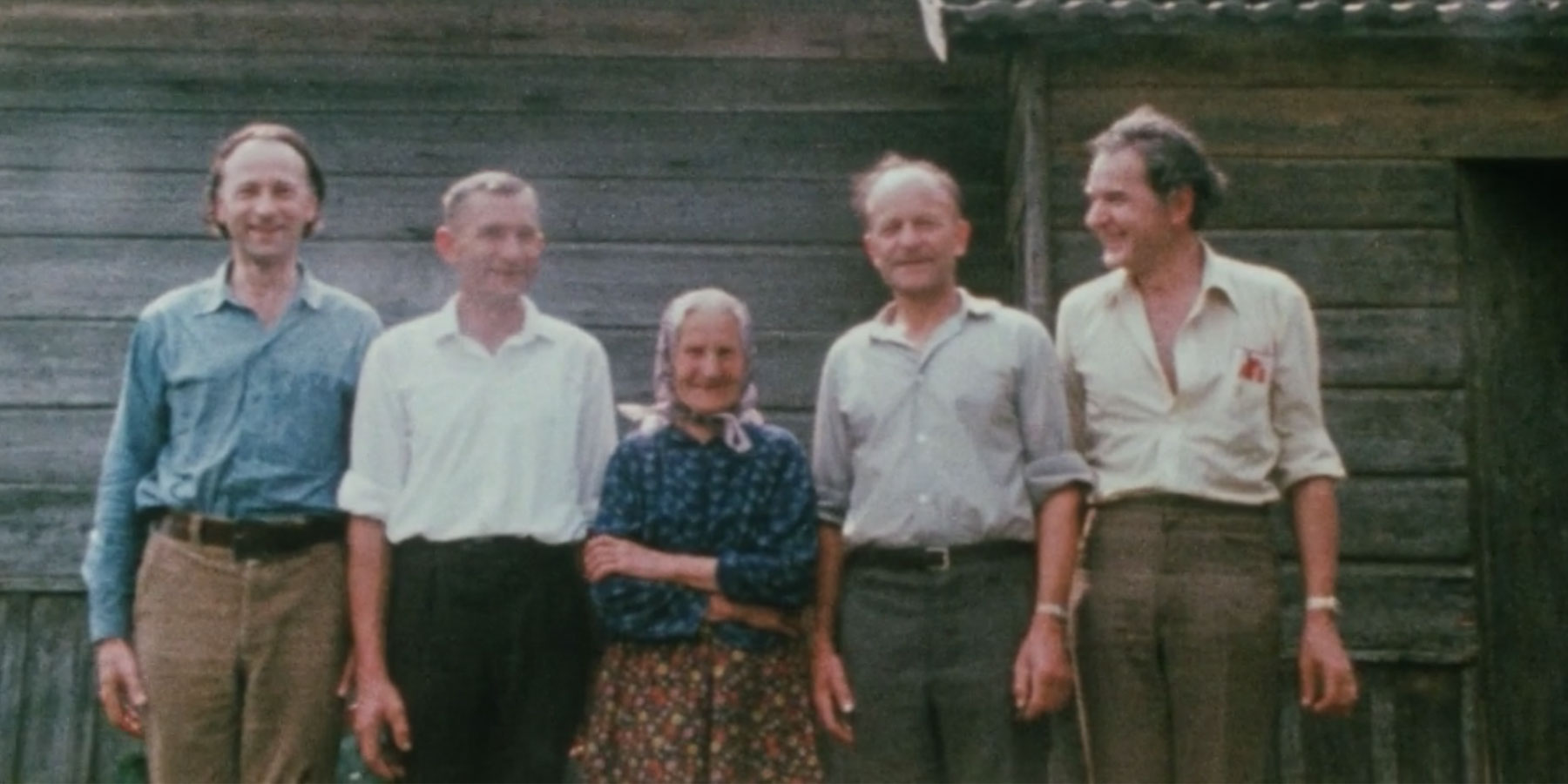 Banner still from Reminiscences of a Journey to Lithuania, courtesy Anthology Film Archives

The “national cinemas” of the countries of the former Eastern Bloc are hardly unknown to film lovers elsewhere in the world. Despite Cold War–era cultural divisions and conflicts, a number of filmmakers from Poland, Hungary, and the former USSR, Czechoslovakia, and Yugoslavia received international acclaim from the 1950s through the 1980s and have continued to receive it since 1989.

Less known and rarely seen both at home and abroad are the histories of filmmaking that took place outside large state-run feature film studios in postwar Eastern Europe.[1] The aim of Artists, Amateurs, Alternative Spaces: Experimental Cinema in Eastern Europe, 1960–1990, curated by the Department of Film Programs at the National Gallery of Art, is to fill these knowledge gaps with the first series of screenings of its kind. The series shows the variety of filmmaking and early video practices that existed in the region in the postwar period, and it sheds light on work that was made by artists and amateurs, as well as professionals, who, despite restrictions, made independent and experimental work both on their own and with the support of smaller state-funded amateur film clubs, festivals, and studios. The scope of the series is broad, and it showcases work from across the region. Present-day countries represented are Croatia, Czech Republic, Estonia, Germany, Hungary, Latvia, Lithuania, Poland, Romania, Serbia, Slovenia, and Slovakia. Though a handful of the films shown were made in the second half of the 1950s, the vast majority fall into the turbulent decades of the 1960s through 1980s, during which waves of enthusiasm for socialism alternated with periods of increasingly bitter disillusionment in “the system.” Against often divergent and country-specific historical backgrounds, what unites the filmmakers included in the series is an interest in film and video that defies the genre expectations of both narrative feature films and “straight” documentary. As a result, these predominantly short works offer highly subjective and partial glimpses into the lives and interests of Eastern Bloc filmmakers. They also, however, highlight the creativity and spirit of experimentation to which many remained committed despite often facing the possibility of official censorship—a facet of the larger history that forms a leitmotif in the series. The organizing principles of the series draw connections both among films made in one place and those made in different countries. Some screenings bring together works created in one institution that shaped its members, such as the Workshop of the Film Form in Łódź, Poland, or the Balázs Béla Studio (BBS) in Budapest, Hungary. These are some of the “alternative spaces” of the series title—officially funded studios that supported at various times a surprisingly wide array of experimental film practices, driven by the dual desire of both filmmakers and policy makers to give younger generations the resources necessary for their artistic development. Interspersed throughout the series are films made at several other such “alternative spaces,” including the Riga Film Studio in Latvia, the Neoplanta Film Studio in Novi Sad, Serbia, and the Se-Ma-For Studio in Łódź.[2]

The significance of these “alternative spaces” is hard to overstate—they seem largely to account for the numerous notable experimental films that came out of such countries as Poland and Hungary. One can appreciate their significance all the more when one considers the experimental films that emerged from such countries as East Germany, Romania, and Russia, where comparable resources were lacking. Though East Germany still produced an active “Super 8 movement,” Romania had the phenomenon of the amateur Kinema Ikon workshop, and Russia saw “Parallel Cinema” emerge in the 1980s, on the whole, the latter groups—whose work undoubtedly has great historical significance—could not match their better-resourced peers living under less repressive regimes in either quantity or artistic and technical sophistication of output. A full mapping of the “alternative spaces” across Eastern Europe is thus imperative to understanding the history of film experimentation in the region. The mapping offered here is only a beginning. Our hope is that future scholarship and public attention will both expand it and shed light on the connections that such spaces fostered among filmmakers from across Eastern Europe (as, for example, in the case of the Croatian filmmaker Ivan Ladislav Galeta, who worked on a number of projects at the BBS in Hungary).[3] Several screenings, most notably the selection of films made by amateurs in Serbia and Croatia and the selection of films from The Enthusiasts project, highlight the history of amateur film clubs in the region. These were another kind of “alternative space” actively supported by some governments in the socialist bloc, particularly those of Poland and Yugoslavia, which saw them, at least in theory, as a way of fulfilling the ideal of offering opportunities for self-realization and access to cultured leisure for all. In Yugoslavia, amateurs were able to organize by and for themselves the Genre Experimental Film Festival (GEFF) in Zagreb, Croatia. Its history, now documented in some depth, is a testament to the vibrant amateur film scene that existed in parallel with the professional mainstream establishment. The existence of this scene, moreover, made more porous the boundary between amateur and professional filmmaking—members of the Academic Film Club in Belgrade, including the renowned director Dušan Makavejev, were particularly prone to crossing over from amateurs to professionals while retaining experimental sensibilities. In Poland, where the history of the amateur film movement was only recently documented by the artists Marysia Lewandowska and Neil Cummings,[4] its significance was nevertheless acknowledged by at least one professional filmmaker as early as 1979 in Krzysztof Kieślowski’s Film Buff (Amator). Still from Painted in the Air, courtesy NFA

The remaining groupings showcase tendencies that transcended national boundaries. These include experimentation with the technical possibilities of materials and mediums; exploration of the actions possible in the private and public spheres; and commemoration of significant historical events. As the series demonstrates, people who had access only to small-gauge “amateur” 8 mm and 16 mm film cameras in the former East also grappled with many of the same concerns as “alternative” media makers in the West, where access to equipment, distribution channels, and professional dialogue was far greater.[5] Yet another commonality that the series traces throughout (and especially in the screening titled “Artists, Collectives, Communities”) is that visual artists all around the former East—much like their Western counterparts—showed widespread interest in exploring the possibilities of film and video, using both amateur and professional resources, depending on what was available.

Although not a comprehensive survey of experimental film and early video in postwar Eastern Europe, this series makes an important step toward illuminating the complicated cinematic past of the region and embedding it in its social history. It maps many of the currently accessible works while exploring the similarities and differences between makers and their methods and motivations. It recognizes the contributions of such renowned figures as Dušan Makavejev and Jonas Mekas, but primarily seeks to acknowledge less well known artists and their legacies. In addition, the films and videos selected shed light on the important work of the archives lending their materials and raise awareness about the importance of preservation, restoration, and circulation of experimental film.

1. The terminology available for denoting the present-day countries and regions that came about after 1989 is notoriously slippery and contentious. For purposes of consistency, we have tried to use “Eastern Europe” and “former Eastern Europe” throughout this website, defining the term broadly to include all the countries of the Warsaw Pact plus the former Yugoslavia as they existed between 1945 and 1989. For an in-depth discussion of the many other terms and groupings available currently, see Dina Iordanova, “The Cinema of Eastern Europe: Strained Loyalties, Elusive Clusters,” in East European Cinemas, ed. Anikó Imre (New York, 2005), 229–49, published as part of the AFI Film Readers series. For an argument for the continued use of the term Eastern Europe as a regional designation in the present, see also Anikó Imre, “Eastern European Cinema from No End to the End,” in A Companion to Eastern European Cinemas (Malden, MA, 2012), 7. (back to top)

2. The Leningrad Documentary Film Studio could be added to this list, although none of its productions are represented in the series. (back to top)

3. Film studios were not the only institutions to foster connections among filmmakers and artists in the Eastern Bloc; art galleries could also play a role as meeting places, as could film festivals held in the West or personal ties developed outside institutional frameworks. For more on this, see Łukasz Ronduda, “Pragmatism of the Margins: On Contacts between Yugoslav and Polish Avant-Gardes in the 1970s,” in As Soon as I Open My Eyes I See a Film: Experiment in the Art of Yugoslavia in the 1960s and 1970s, ed. Ana Janevski (Warsaw, 2010), 53–64. (back to top)

5. One instructive example of the kinds of institutions, international communication networks, and curricula for educating the broad public about experimental film that its devoted promoters were able to develop in the United States can be found in this interview with the Lithuanian American filmmaker Jonas Mekas, in which he describes the founding of Anthology Film Archives in New York and the creation of the Essential Cinema Repertory Collection. (back to top)