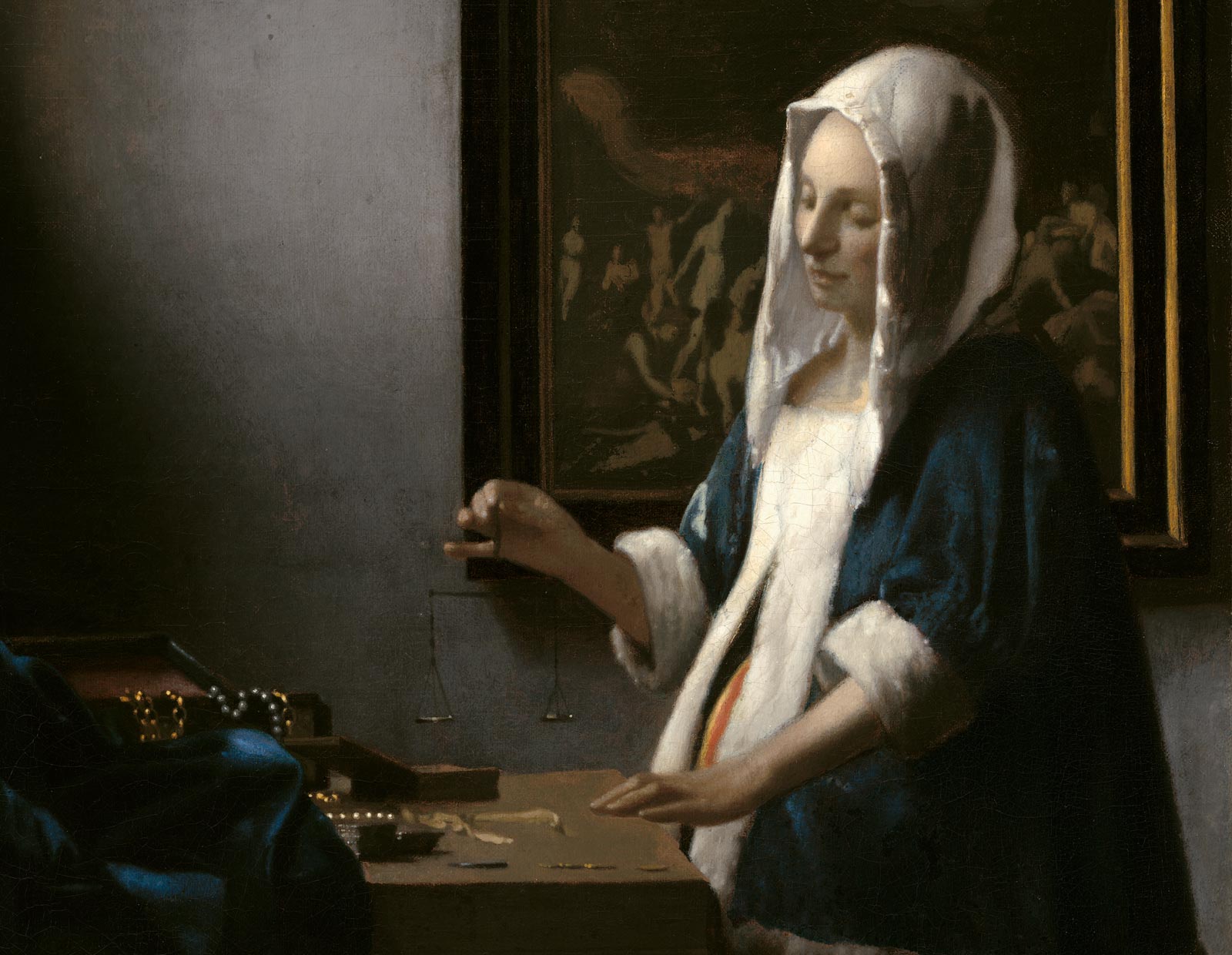 The gesture [of holding the balance] requires precise coordination of delicate physical and mental calculations—the same capacities that Vermeer's art demanded from him.

Lisa Vergara, "Perspectives on Women in the Art of Vermeer," 2001

offers a superb example of ’s exquisite sense of order and rhythm. A woman dressed in a blue jacket with fur trim stands serenely at a table in a corner of a room. The jeweler’s balance in her right hand rests at equilibrium. A large painting of the Last Judgment, framed in black, hangs on the back wall of the room. A shimmering blue cloth and an open jewelry box with two strands of pearls and a gold chain lie on the sturdy table. Soft light coming through the window illuminates the scene. The woman’s deep introspection causes the viewer momentary hesitation about intruding on this private, contemplative moment.

The woman’s gaze at the balance, when considered in the context of the Last Judgment on the wall behind her, suggests that Vermeer, a Catholic, sought to infuse this work with religious and spiritual significance. Saint Ignatius of Loyola instructed the faithful to examine their consciences and weigh their sins as if facing Judgment Day. Only such deliberation could lead to virtuous choices along the path of life. Poised between the earthly treasures of gold and pearls before her and Last Judgment painting’s stark reminder of the eternal consequences of her actions, this woman personifies the values of materialism and morality that jostled for dominance in 17th-century Dutch society.

The painting’s subtext is reinforced by Vermeer’s refined composition and lighting. For example, the delicate hand holding the balance is placed directly in front of the frame’s dark corner, while the scales are set off against the bare plaster wall—an effect that Vermeer created by manipulating reality. Note that the bottom of the Last Judgment’s frame is slightly higher to the left of the woman than it is behind her back.

Related Works by Vermeer in the Collection It is possible that the young man pictured at the left could be Vermeer’s self-portrait, although there has been no written evidence to confirm it. The artist would have been 24 at the time.

Johannes Vermeer is today one of the most famous European artists of all time. He was born and died in the city of Delft, with which he is strongly associated. His father Reynier was a weaver of fine cloth, which provided the family a comfortable living. In 1631, the year before Johannes was born, his father joined the St. Luke's Guild as a picture dealer.

No records document Vermeer’s early artistic training and apprenticeship—neither where nor with whom he trained. In 1653 he registered as a master painter with the St. Luke’s Guild and had inherited Reynier’s art-dealing business the previous year. In April 1653 he married a Catholic, Catharina Bolnes, whose mother, Maria Thins, exerted significant influence over the couple’s lives. She is likely to have required Vermeer, born a Reformed Protestant, to convert to Catholicism. Johannes and Catharina eventually moved into Maria’s house.

Vermeer’s early ambition was to become a history painter. By the mid-1650s, however, he had turned to domestic scenes and had begun to express his interest in various techniques and devices that could aid him in creating lifelike effects. For example, he seems to have used the camera obscura, a pinhole device used to project an image onto a wall surface with a lens. The device exaggerated spatial effects, and the projected image was probably not sharply focused. Vermeer often incorporated blurred effects in his work, similar to those created by the camera obscura.

Vermeer’s oeuvre was small; only about 35 authentic paintings are known today. He was respected in artistic circles and elected headman of the Delft artists’ guild on several occasions. Nonetheless, in later years, he struggled financially, raising 11 children and also coping with the economic downturn in the 1670s after France invaded the Netherlands.

After Vermeer’s death at 43, his wife was forced to declare bankruptcy, and the works in her possession were auctioned. The artist’s name was largely forgotten until the late 19th century—so much so that the iconic Girl with a Pearl Earring (Mauritshuis, The Hague) was sold for only two guilders and 30 cents in 1882.